'Terrorism in each case is driven by distortion of religion. Fight against terror is not a confrontation against any religion,' said Swaraj. 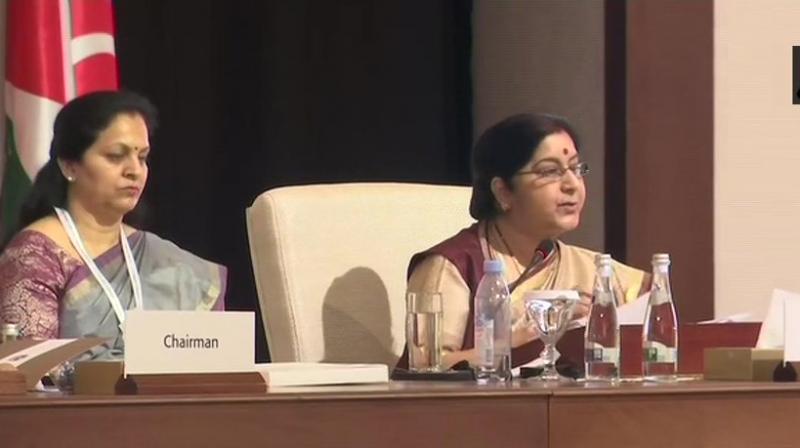 “OIC members constitute 1/4th of the United Nations and almost a quarter of humanity. India shares much with you, many of us have shared dark days of colonialism,” said Sushma Swaraj.

“I'm honoured to join colleagues from nations that represent a great religion and ancient civilisations. I stand here as a representative of land that has been mountain of knowledge, beacon of peace, the source of faith and traditions, home to many religions and one of the major economies,” said Swaraj.

Many of us saw the light of freedom and ray of hope at the same time, we have stood together in solidarity in our quest for dignity and equality, said Swaraj.

Terrorism is destroying lives, destabilising regions and putting the world at great peril. Terror reach is growing and the toll it is taking is increasing, said Swaraj.

"Terrorism in each case is driven by distortion of religion. Fight against terror is not a confrontation against any religion. Just as Islam means peace, none of the 99 names of Allah means violence. Similarly, every religion stands for peace," said Swaraj.

Indian Muslims practice their respective beliefs and live in harmony with each other and with their non-Muslim brothers. It's this appreciation of diversity and coexistence that has ensured that very few Muslims in India have fallen prey to the poisonous propaganda of radical and extremist ideologies, said Swaraj.

“India has always embraced and found it easy to embrace pluralism since it is embedded in the oldest Sanskrit religious text “The Rig Veda” and I quote "Ekam sat vipra bahudha vadhanti", which means “God is One but learned men describe him in many ways," said Swaraj.

I come from the land of Mahatma Gandhi where every prayer ends with a call for 'shanti' that is peace for all. I convey our best wishes, support and solidarity in your quest for stability, peace, harmony, economic growth and prosperity for your people and world.

"Recognising India's engagement with the Islamic world. EAM Sushma Swaraj arrives in Abu Dhabi for the Ministerial Meeting of India has been invited by HH Sheikh Abdullah bin Zayed Al Nahyan, Foreign Minister of UAE as the 'Guest of Honour',” Spokesperson of the Ministry of External Affairs (MEA), Raveesh Kumar had written on Twitter.