Curfew in Shillong after 2 killed in clash

Police said that a taxi driver, Lurshai Hynniewta from Sohra area, who was injured in the clashes, succumbed to injuries in a hospital. 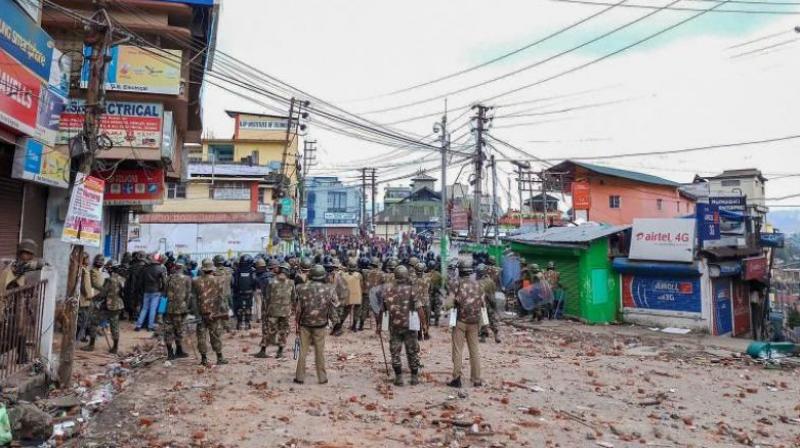 The violence followed a meeting against the Citizenship (Amend-ment) Act and implementation of the Inner Line Permit (ILP) regime in the state. Ichamati, which is close to the border with Bangladesh, has a majority non-tribal population. (Photo: File/PTI)

Guwahati: Curfew was imposed in trouble-torn areas of Shillong and mobile Internet services were suspended on Saturday following a violent clash between members of Khasi Students Union (KSU), an influential tribal students body, and non-tribals in the Ichamati area of East Khasi Hills district of Meghalaya leading to two deaths.

The violence followed a meeting against the Citizenship (Amend-ment) Act and implementation of the Inner Line Permit (ILP) regime in the state. Ichamati, which is close to the border with Bangladesh, has a majority non-tribal population.

“The administration decided to impose curfew in trouble-torn areas after reports of clashes and two vehicles being torched by some miscreants. We also arrested eight persons from Ichamati who were directly involved in the violence which killed one person and injured several others. They are named in the FIR,” said Claudia A. Lyngwa, the superintendent of police, East Khasi Hills district. He claimed that situation was tense but under control.

Police said that the violence began after a meeting organised by KSU in Ichamati. “At about 3 pm, after the meeting, clashes broke out between KSU members and local non-tribals of the area. Thereafter, KSU members burnt a haystack at the edge of the market and attempted to burn a house. Non-tribals retaliated and stoned a bus carrying KSU members,” the police said in a statement.

Several KSU members and policemen were injured in the clash. Vehicles were also vandalised by the mob. It is still unclear what prompted the group to attack those present in the meeting.

Most of Meghalaya is covered under the Sixth Schedule of the Constitution and hence it is out of the purview of the CAA. Yet, amid local pressure, the state Assembly had passed a resolution to demand an Inner Line Permit regime to regulate the entry of non-locals. The home ministry is yet to issue a notification. The powerful KSU, which is also the part of North East Students Organisation (NESO), and other tribal groups have been pushing for ILP and spearheading a movement to mount pressure on the government to regulate the entry of non-locals in the state.

Police said that a taxi driver, Lurshai Hynniewta from Sohra area, who was injured in the clashes, succumbed to injuries in a hospital.

“Four members of KSU were injured — two were sent to Ichamati CHC and discharged, two were referred to Sohra CHC. One local taxi which had gone to collect the KSU members from the Ichamati market after the clashes was damaged.” The areas under curfew include Police Bazar, Jail Road, Keating Road, Polo, the whole of Jaiaw, Mawkhar, Mawprem, Umsohsun, Wahingdoh, Mission, Lumdiengiri, Qualapatty , Sunny Hills, Cantonment, Boucher road and Mawlang Hat.

Meghalaya chief minister Conrad Sangma has made an appeal for peace.