Though he did not deliver any speech and sat in the third row, Mr Mishra appeared to be the main attraction of the TV channels and the participants. 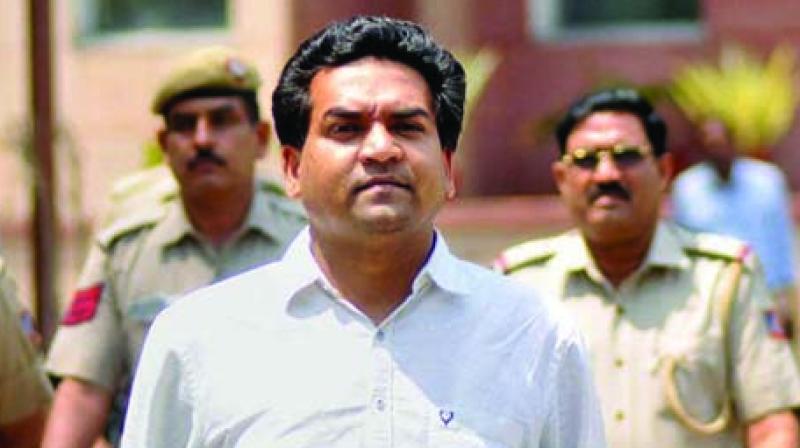 NEW DELHI: Is the controversial BJP leader Kapil Mishra, accused of instigating the Delhi riots, emerging as the Hindutva face of the national capital? Amidst chants of “Jai Shri Ram” and “Bharat Mata ki Jai”, Mr Mishra participated in a peace march organised by an RSS-backed NGO, Delhi Peace Forum, at Jantar Mantar on Saturday.

Giving a communal overtone to the march, participants held placards that read, “Delhi against jihadi violence.” To drum up support of the majority community, huge posters of the slain constable Ratan Lal, the IB staffer Ankti Sharma and Dinesh Khatik, a Dalit who was killed in the riots, were put up on the stage.

Though he did not deliver any speech and sat in the third row, Mr Mishra appeared to be the main attraction of the TV channels and the participants.

The organisers of the peace march did not seem to be too pleased with Mr  Mishra's presence. Some claimed that he was not invited and came on his own. However, Mr Mishra stole the thunder by requesting the people over Twitter to reach Jantar Mantar to participate in the peace march

Mr Mishra, a former AAP MLA who contested unsuccessfully from the Model Town Assembly constituency on a BJP ticket, was first seen seated in the front row below the stage but later moved to the third row. He did not address the gathering nor try to go on the stage.

According to sources, after seeing Mr Mishra in the front row the organisers contacted the BJP city unit to request it to ask him to move back. “We messaged Mr Mishra to move back by a few rows. After our request he was seen sitting in the third row," said a Delhi BJP office-bearer.

Later in the evening, Mr Mishra tweeted a video of the march waving the Tricolour and said, “Look at the crowd today at Jantar Mantar, ‘tum kitna bhi jhooth phailao, ye public hai sab janti hai’ (No matter how much you lie, the people know everything).”

According to the organisers, the people whose family members were killed or houses and shops were burnt during the riots participated in the peace march.

Mr Suresh Khatik said that his brother Dinesh was shot dead when he went out on February 24 to Shiv Vihar to buy milk for his one-and-a-half-year-old son.

Mr Kamal Sharma said his two restaurants in Bhajapura were burnt by mobs. “Those who used to eat at my restaurants for the last three years set them on fire,” he added.

The speakers, who included some retired Army officers, said that the Citizenship Amendment Act was not against any Indian citizen irrespective of their religion. Before the march began, homage was paid to those killed in the riots. Afterwards, those in the march raised slogans against the rioters and demanded their arrest. Thousands of people marched from Jantar Mantar to Connaught Place shouting slogans.