The entire locality was out on the road to mourn the death of these two boys even as others are keeping fingers crossed for their `missing’. 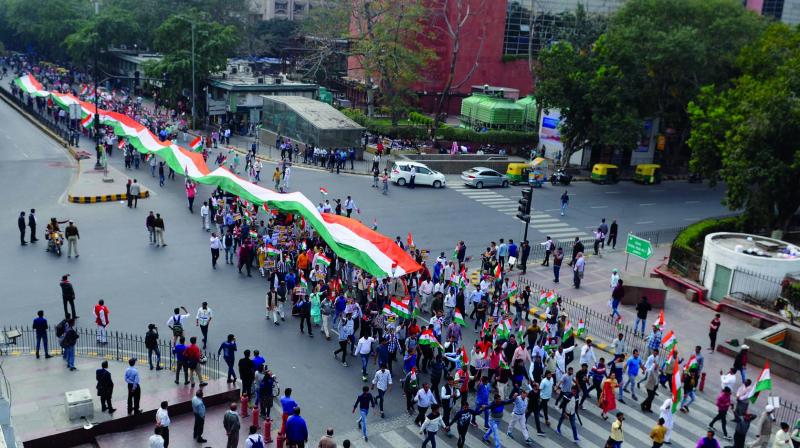 People carry a tricolour during a peace march to protest against communal violence in northeast Delhi on Saturday. (Photo: Biplab Banerjee)

New Delhi: The eerie silence that had been prevailing in the violence-hit Old Mustafabad was shattered by the cries and wails as bodies of the riot victims, released by the authorities started arriving Saturday morning. Fear continues to stalk people in nearby Shiv Vihar which now stands completely destroyed. Its residents, mostly Muslims, have taken refuge in nearby Chaman Park and are living with the fear of an impending attack and houses captured by the goons. As a brittle peace hangs over Northeast Delhi, SDMs have started making assessment of the damage for compensation.

Aamir (27) and Hashim (17) — two brothers were found dead in the nearby “nala” from where several dead bodies are being fished out. Some have bullet marks, some had limbs severed and somebody torn into two. It was clear that death did not come easy and they were brutally tortured before being killed.

The entire locality was out on the road to mourn the death of these two boys even as others are keeping fingers crossed for their `missing’. Both men and women have bore the brunt of the violence that continued even after National Security Advisor Ajit Doval toured the riot hit area twice.

“He (Doval) had said nothing will happen, but that same night petrol bombs were hurled at our homes, bullets were fired and acids were thrown,” said Asif. Nadeem said more than 400 calls were made to PCR for help in one hour but cops refused to come.

“You wanted Azadi, now take Azadi’ was how they responded when we called them (police),” said Nadeem. His neighbour Ram Singh (name changed) arranged safe passage for more than 200 Muslims trapped in violence.

“They were outsiders but there were many local boys too who were involved in arson, loot and violence. I could never think that our own boys will kill people here,” broke down Ram Singh while narrating the horrific three days that changed their life. He accused the “right-wing” groups of this.

Gali No 7 of Shiv Vihar, which has taken the maximum brunt, is an interesting mix of Hindu and Muslims who have lived in harmony for years, Ram Singh claimed. However, here while many Hindu houses too have been destroyed, some have been surprisingly spared.

“The houses that had Jai Shri Ram written were not touched. But I will help my Muslims neighbours restart their life when they come back,” said Vishal whose property was left untouched while the mosque next door was burnt.

With their belonging completely charred, children are worried about their future. “Modiji says beti bachao, beti padhao. How do we study now? Our admit cards are burnt. We have no certificates, no proof, no notes, no copies, no books,” said Fatima, a Class 10 student.

Women are much more traumatised and claimed there were acid attacks and gangrapes too. “One girl was gang-raped and is missing,” claimed Nazma (name changed) as she showed a photograph of a girl recuperating from an acid attack in nearby government hospital. Independent verification of such claims is impossible at this point of time as men and women are huddled in various corners.

People are desperate to return to their homes but are not allowed by Rapid Action Force and police at this point of time. RAF men stationed in Shiv Vihar said that people can return only after the government gives direction. However, they are allowing people to collect their belongings.

Meanwhile, amid pall of gloom due to death and destruction there was hope and news of joy too. A nine-month pregnant woman who was kicked in her belly by the rioters has delivered a baby boy in the Al-Hind Hospital in Old Mustafabad. Many injured are recovering and are being discharged. In fact, one man who was Relief has started pouring in. The roads are being cleared of debris and process for distribution of compensation by the Delhi government has begun.

“All that is fine but there has to be proper closure and documentation of what has happened. People need speedy justice and rehabilitation. Missing need to be traced. Dead are being shown as victims of road accidents. These people have suffered a lot, now they must not become victims of administrative failure,” said Dr M.A Anwar of the Al-Hind Hospital.