Delhi abstains in yet another vote, on special UN general Assembly session 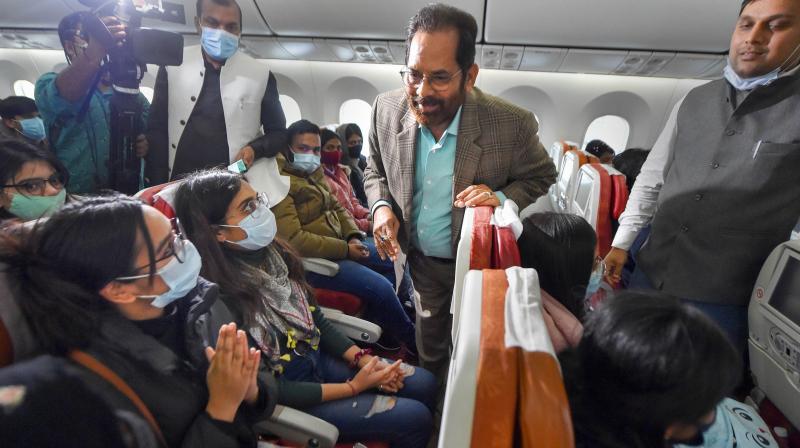 New Delhi: The government said on Monday that it is rushing four ministers to oversee the safety and return of Indian nationals, mostly students, from war-struck Ukraine. Union ministers Hardeep Singh Puri, Jyotiraditya Scindia, Gen (Rtd) V.K. Singh and Kiren Rijiju will be positioned in Ukraine's neighbouring countries Hungary, Romania-Maldova, Poland and Slovak Republic, respectively, to coordinate and oversee the evacuation of Indians. Union ministers have also been deployed to receive them at Indian airports.

This announcement came after India once again abstained at the United Nations Security Council during a vote to convene a rare Emergency Session of the 193-member General Assembly on the Russian military action on Ukraine.

Congress MP Shashi Tharoor slammed the government's decision not to vote for Ukraine at the UN. “If the Chinese march into our country we would want other countries to stand up for us. If Ukraine expects us to speak to Russians, then at least we should try and be counted on the right side of the issue,” he said even as his party quickly said his views are personal and do not reflect the party’s opinion.

“We continue to be deeply concerned about the safety and security of the Indian nationals including a large number of Indian students who are still stranded in Ukraine," said India's Permanent Representative to the United Nations T.S. Tirumurti during the UNSC meeting even as India welcomed the announcement by Russia and Ukraine to hold talks at the Belarus border. He added it was “regrettable that the Ukraine situation has worsened further since the Council last convened on this matter.”

“We reiterate our call for immediate cessation of violence and an end to all hostilities. There is no other choice but to return back to the path of diplomacy and dialogue. Our Prime Minister has advocated this strongly in his conversations with the Russian Federation and Ukraine,” he added.

Prime Minister Narendra Modi on Monday held another meeting on the Ukraine crisis. This was the third such meeting in the last 24 hours.

Foreign secretary Harsh V. Shringla said the Indian government will be sending humanitarian aid to Ukraine and that it is in touch with the International Committee of Red Cross in Geneva for the needs of citizens stranded in Ukraine. MEA officials said the aid will include medicines among other things as sought by the Ukrainian government.

More flights carrying Indian students are landing in various cities. In Delhi, the sixth evacuation flight from Hungary’s capital city Budapest carrying 240 Indian nationals was welcomed by Union minister Mukhtar Abbas Naqvi. Air India Express has also joined Operation Ganga operating flights between Mumbai and Bucharest. Poland ambassador to India Adam Burakowski said already more than 2 lakh people have crossed the border into Poland, including Indian students. “The border points are overcrowded but we are receiving everyone with a warm heart… There will be special flights for Indian students. Poland is cooperating and will also help India's High-level delegation in the evacuation process. Indian nationals can cross into the Poland border without any visa,” Mr Burakowski added.

With the weekend curfew lifted in Kyiv, the Indian embassy in Ukraine asked all students to make their way to the railway station for onward journey to the country's western parts. Ukraine Railways is operating special trains for evacuation. “Indian students from Odessa who are in shelters in Moldova set up by Moldovan government are requested to remain in the shelters. Embassy officials are in Chisinau and will go to the shelters to facilitate evacuation,” Indian embassy said. It added, “It has been brought to our notice that some people are charging money to transfer Indian students from the Romanian border to Bucharest. Please note that all services provided by the Embassy are free, including transport to Bucharest. Please do not pay money to anyone.”

Mixed stories of struggle to cross borders keep coming from Ukraine. Some lucky ones managed to be evacuated early while many had to tread miles yet remained stuck at borders in freezing weather.

“Our focus is of course on land borders to get them on the bordering countries of Ukraine. There have been some difficulties on Poland's borders and it is pretty crowded. Though there are still difficulties but situation has improved. Our embassy has managed to take out some students but more are there. Food and shelter has been arranged for them till they board flights. At the border with Romania and Hungary we have managed to bring out more people even as large crowds still remain in all border points. We have opened new route through Moldova to bring out people from Southern Ukraine like Odessa etc,” he said

“We are encouraging Indians to move to Western Ukraine. Some students are taking trains and reaching to western side but do not move to the borders on their own without coordinating with us as there is long waiting and queueing on the borders. Stay in nearby cities and stay put till we make arrangements to take you out. Do not panic. There are enough flights and our teams are there to help students out,” he added.

“We are closely monitoring Kyiv and Kharkiv… Over the next 24 hours three more flights are scheduled -- two from Bucharest and one from Budapest. Flights are not the constraints but the main focus is to get Indians to cross over to the neighbouring countries. Students should not panic. We are constantly augmenting MEA teams in the area,” Mr Bagchi said.

When asked about the mistreatment and beating of Indian students at Ukraine-Poland border by the Ukraine security allegedly after India abstained in UNSC voting, Ukrainian ambassador in India Igor Polikha said Ukraine is doing everything possible in challenging circumstances to facilitate the exit of Indian nationals, especially students, adding ”though Russian President Vladimir Putin alone can give assurances for their safety” even as he brushed aside these reports. Instead, he said there was need for discipline and calm at the border checkpoints to ensure the orderly exit of all foreigners. “There are bound to be issues as some 500,000 Ukrainians and foreigners seek to flee through the land borders with Poland, Hungary, Romania and Slovakia. It is a war, it’s a deep crisis... I can assure that the Ukrainian side is helpful to everyone who is trying to leave the territory,” Mr Polikha said. He added that even the Ukrainian defence attaché and his wife along with several others remained stuck at the Poland border for three days.