There were reports of poll violence in Heingang, the constituency of chief minister N. Biren Singh 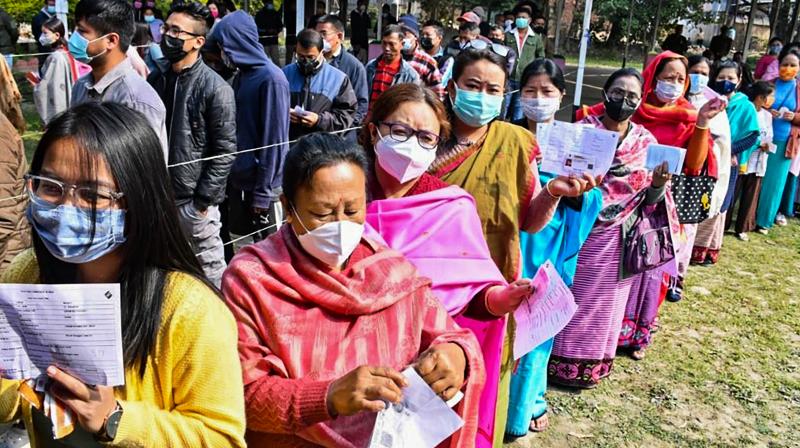 Women holding their identification cards, wait in a queue to cast their vote during the first phase of Manipur Assembly Elections, in Manipur. (PTI Photo)

Guwahati: Amid reports of sporadic incidents of violence, more than 78 per cent voters came out to exercise their franchise in the first phase of the Assembly polls in Manipur on Monday. A Manipur Police personnel who was on poll duty was killed in a suspected case of accidental firing.

There were reports of poll violence in Heingang, the constituency of chief minister N. Biren Singh, where Congress accused the ruling BJP of resorting to rigging the polls. The Congress candidate complained that his agents were not allowed to participate in the polling process.

Chief Electoral Officer (CEO) Rajesh Agarwal said that an incident of poll disruption was also reported in Keithelmanbi which led to a delay in the polling process. He said that EVM machines were broken in the polling stations.

Mr Agarwal also told reporters, “A Manipur Police personnel, who was on poll duty on Monday, was killed in a suspected case of accidental firing from his service rifle during the first phase of assembly elections to 38 seats in the state.”

The incident took place in Tipaimukh assembly constituency in Churachandpur district. The police personnel was identified as Naorem Ibochouba, a resident of Kakching district and his body has been airlifted to Imphal and sent to a state-run hospital for autopsy.

Security sources said that voting began at 7 am in 1,721 polling stations in five districts amid tight security and strict adherence to Covid-19 protocols. At least one person was injured in a clash between two parties in Churachandpur district. Allegedly Congress workers vandalised a BJP polling booth in Kakwa area in Langthabal constituency in Imphal West district, while a vehicle of an NPP candidate was damaged by supporters of a rival group in Keirao seat, although nobody was injured in the incident.

Polling was stalled at a polling station in Saitu constituency Monday morning after a clash broke out between two groups, police said. This is the first of the two-part election in the insurgency-hit state.

The second phase of polling for the remaining 22 seats will be held on March 5, and the votes will be counted on March 10.