The minister, V Kashiho Sangtam, added that the forensic report is awaited after which the SIT will submit its finding 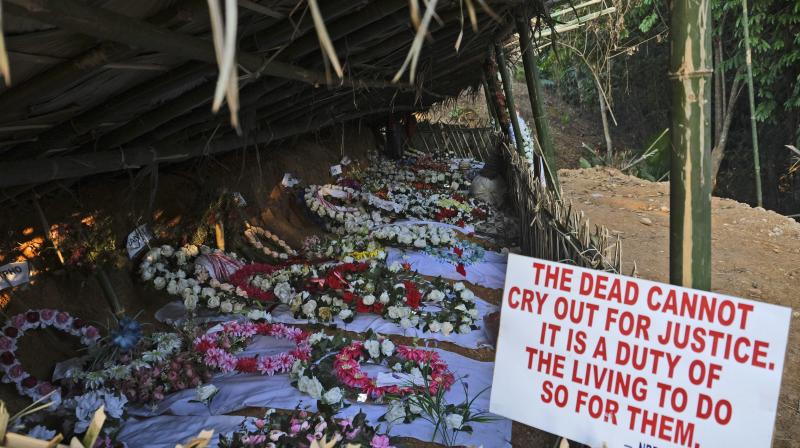 The graves of 12 civilians, killed by Indian army soldiers on Dec. 4, lie in a row in Oting village, in the northeastern Indian state of Nagaland. (Photo: AP/File)

Kohima: The Special Investigation Team (SIT) is still awaiting the report of the forensic laboratory in the border violence incident in which 14 civilians from the state had died.

Nagaland Minister for soil and water conservation V Kashiho Sangtam told ANI that the SIT has completed its investigations and is ready with the report. But the forensic report is awaited after which the SIT will submit its findings, he said.

"The SIT which was formed by the Nagaland government to probe the deaths of 14 civilians in Mon district in the violent border skirmish will submit its report soon. The SIT is yet to receive the forensic laboratory report. The SIT will submit its findings after receiving the forensic report. The state government will take a decision on the matter after receiving the SIT report," Sangtam added.

The border violence had led to deaths of 14 civilians and one security personnel also killed and many were injured that took place between Tiru and Oting villages in the Mon district on December 4 and 5, last year.

Earlier, the SIT had examined and recorded statements of the officers and jawans of 21 Para Special Forces who were allegedly involved in the firing incident.

On the other, Sangtam on the issue of the border dispute between the two neighbouring states said that the issue between Assam and Nagaland is now in the Supreme Court.

"Whenever the Supreme Court will give the verdict, both states will come together to resolve the inter-state border issue," the Minister said.