India   All India  01 Apr 2017  EVM in MP dispensed votes only for BJP: Cong urges EC to return to ballot papers
India, All India

EVM in MP dispensed votes only for BJP: Cong urges EC to return to ballot papers

Cong argued that if the Bank of Bangladesh's account can be hacked ‘then why can't EVMs be tampered’. 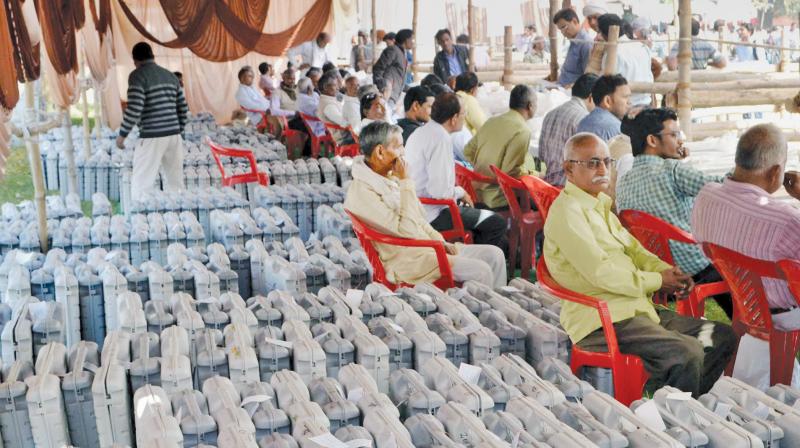 New Delhi: Crying foul over efficacy of EVMs in Madhya Pradesh, the Congress on Saturday knocked at the doors of the Election Commission and demanded scrapping its use in upcoming elections while reverting to old ballot paper system.

Citing the incident of Bhind where VVPAT machines dispensed slips only with BJP symbol, a delegation of Congress leaders met Chief Election Commissioner Nasim Zaidi and two other ECs seeking a thorough probe and strict action against officials involved.

"All parties should be taken into confidence for the credibility and viability of use of EVMs or to revert back to the old system of ballot papers," the Congress delegation said.

"In the face of revelations about tampering of EVMs, it is necessary that the entire process be re-examined thoroughly and all agencies and persons involved in maintenance, operation and data feedings of machines be examined before use of EVMs in further elections," the party said in a memorandum.

Congress general secretary Mohan Prakash said, "In a democracy, time and again there have been doubts created on EVMs. We have demanded that elections be held on ballot paper because every section has created doubts on EVMs. If there are doubts on votes cast, then democracy is weakened."

Another party general secretary Digvijay Singh said, "The next elections, be it in Gujarat or elsewhere, should be held with ballot papers and the use of EVMs be stopped."

He also questioned the "compulsion" of "using EVMs whose chip was imported".

He argued that if the Bank of Bangladesh's account can be hacked and 80 million Dollars be stolen, besides 30 million dollars from the Russian bank, "then why can't EVMs be tampered".

"When elections all over the world, including in the developed countries, are taking place with ballot paper, why should we have problems in doing so," Singh said, adding he had doubts on the efficacy of EVMs right from day one.

Terming this as a "serious issue", Mittal said, "This is something substantially wrong. If this is found in EVMs, then it is better to discontinue its use. The entire credibility of electoral process is in jeopardy."

Singh added, "From (LK Advani) Advani to Mayawati to (Arvind) Kejriwal, I stand with them on this."

Notably, BJP veteran Advani had raised doubts about possibility of EVMs malfunctioning after the 2009 elections when UPA emerged victorious second time in a row.