Lessons on stories of prominent leaders, including Modi, to be part of syllabus. 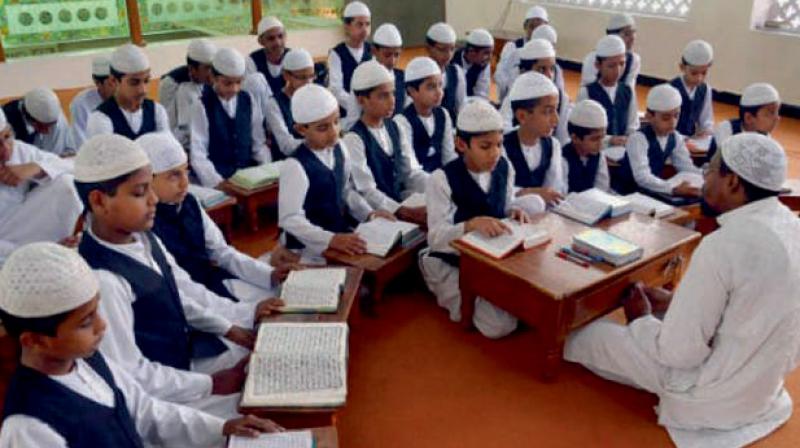 The Madrasa Board in the BJP-ruled Madhya Pradesh is preparing a course on the patriotism’s place in Islam.

Bhopal: The Madrasa Board in the BJP-ruled Madhya Pradesh is preparing a course on the patriotism’s place in Islam.

Lessons on life stories of prominent leaders, including the Prime Minister Narendra Modi, would also be a part of syllabus.

“The Board is preparing a syllabus on the topic ‘Vatan Se Mohabbat Ka Islam Dharam Me Kya Mahatva Hai’ (what is the importance of love for one’s country in Islam) so that students learn what a high status the religion they follow (Islam) has given to those who love their country and to the loyalty to the country,” Madhya Pradesh Madrasa Board chairman Syed Imad Uddin said here.

“We are also including lessons on the lives of Narendra Modi, Shivraj Singh Chouhan, Abul Kalam Azad who himself was a product of madrasa, A.P.J. Abdul Kalam, Pan-dit Deendayal Upadhyaya and others to educate madrasa students about their life struggles and their achievements,” he said. The ongoing Narma-da river conservation programme “Namami Devi Narmade” would also be a part of syllabus, he said.

A committee would soon submit its report on these new topics in the syllabus to the Rajya Shiksha Kendra (RSK) for approval, and after getting the nod, these new lessons would be taught in madrasas, he said.