The DGP has said that women policemen in plainclothes should be posted to help the anti-Romeo squads. 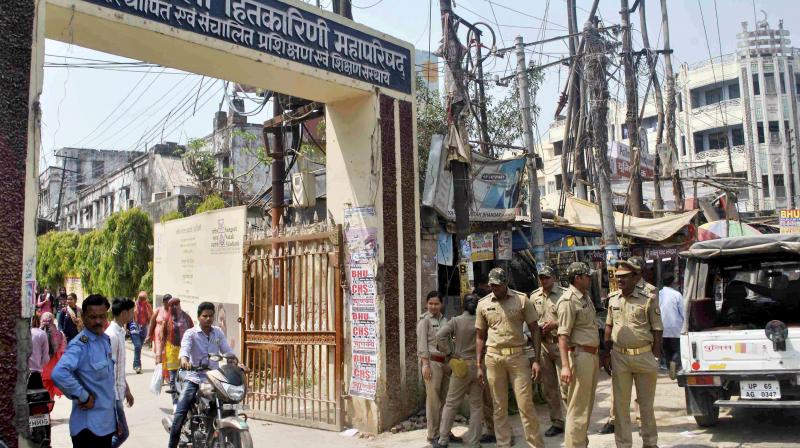 Anti-Romeo squad on duty outside a women's college in Varanasi. (Photo: PTI)

Lucknow: On the orders of UP chief minister Yogi Adityanath, UP DGP Javeed Ahmad on Friday directed the police force to ensure its anti-Romeo squads do not resort to blackening of the face or “murga” position type punishments in the name of protecting women.

The rules have been framed in the wake of reports of harassment by the cops emerged from different parts of the state. In his letter sent to all district police chiefs, the DGP has said that there should be no shaving of heads, blackening of faces and “murga punishment”.

He has also said that there should be no discrimination on basis of caste, religion or faith.

The Allahabad high court on Thursday had asked the state government to frame guidelines for the anti-Romeo squads which has been formed to check harassment of women. The government has also made it clear that vigilantism of any sort in this regard will not be tolerated.

In the past two weeks, there have been reports of the cops making young boys shave their heads or take the murga punishment in which the offender is made to bend his knees and catch his ears.

The DGP has said that women policemen in plainclothes should be posted to help the anti-Romeo squads. The women cops should be given the correct information about what is objectionable.

The chief minister has also directed administrative and police officials in districts to regularly review the steps being taken for women security and inform senior officials on a regular basis.

The government is firm on checking unnecessary harassment of girls and boys in the name of curbing eve-teasing in public places like coffee shops, markets and parks.