The Congress has accused the BJP of using unfair means to attain a majority in Goa. 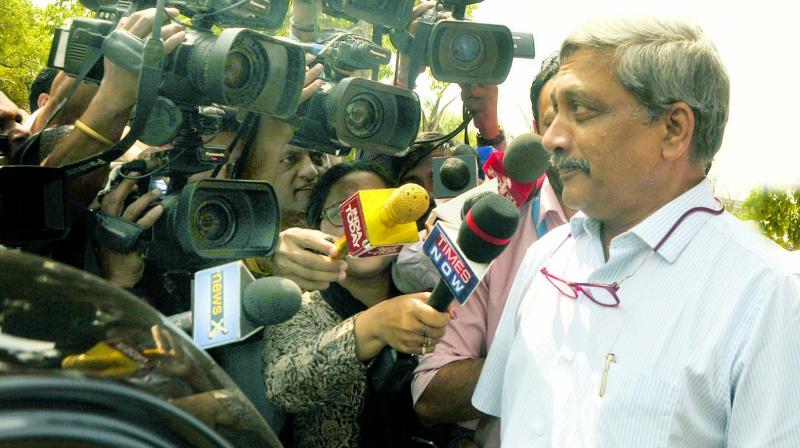 New Delhi: Congress members raised slogans and trooped into the Well of the Rajya Sabha as Goa chief minister Manohar Parrikar was seen in House on Friday.

Mr Parrikar, who was sworn in as the Goa chief minister earlier this month, walked in during the Zero Hour when Congress member Rajni Patil was about to speak.

Immediately, several members, including Digvijay Singh, Congress general secretary incharge of Goa, and B.K. Hariprasad, were up on their feet shouting slogans. Some BJP members too stood up and retaliated. As the shouting continued, deputy chairman P.J. Kurien stood up to bring order in the House. “Please give some respect to the Hon’ble lady member,” he said and asked Ms Patil to raise her issue.

After that Mr Parrikar stood up for a moment but instantly several Congress members were back to sloganeering. Several party leaders, including Rajeev Gowda, Hussain Dalwai as well as Ms Patil, reached the Well of the House raising slogans against the former defence minister.

The Congress has accused the BJP of using unfair means to attain a majority in Goa. The BJP has rejected the charges, saying the Congress did not have the numbers and was only creating hype.

Earlier in the day. Mr Singh again raised the issue of his pending substantive motion on the conduct of Goa and Manipur governors and sought to know when Leader of the House Arun Jaitley will find time to decide on the date of a discussion on the matter.

When the House met for the day, Mr Singh said he has become a “laughing stock” as people and journalists keep asking him about what happened to the substantive motion he gave two weeks ago. “Please assure that the motion will be taken before the session ends,” he said. “Chairman can call the Leader of the House and me and decide on the time and date.

However, Mr Kurien said the Chair has accepted the substantive motion and it is pending business. “Chair will come back to you” on the time of discussion,” he said.