India   All India  01 Apr 2017  Use of terms like Muslim terrorists wrong, I feel uncomfortable: Dalai Lama
India, All India

The spiritual leader advised winning over such individuals through love and compassion. 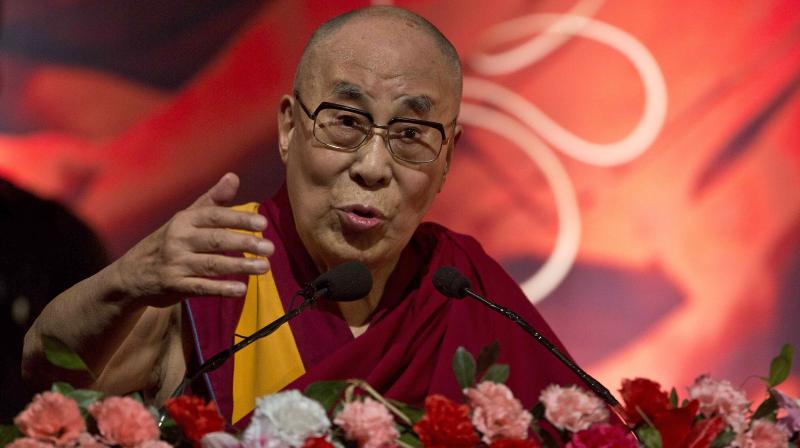 The Dalai Lama also said the voice for peace was growing stronger in the 21st century and India's secular traditions could go a long way in reducing the global sufferings and tension.

The Nobel laureate expressed his aversion to the negative, community-specific terminologies, while speaking at a platinum jubilee anniversary function of 'The Assam Tribune' group of newspapers in Guwahati.

"The use of such terms (like Muslim terrorists) is wrong and I feel uncomfortable. There are genuine followers of Islam who follow the Koran seriously and sincerely," said the Dalai Lama, at the function which also marked the golden jubilee of 'The Dainik Asom.'

"A magazine had also referred to some Buddhists in Burma, harming Muslims. But these are done by a few individuals," he said, while pointing out that there exist "mischievous elements" in all communities, but they do not represent the whole community and its traditions.

The spiritual leader advised winning over such individuals through love and compassion.

"There should be efforts to reach out to these elements, calm down their minds and gradually win them over through love and compassion," the Dalai Lama said.

Dwelling upon the need for global peace, the Dalai Lama said the 20th century witnessed widespread violence and suffering with more than 200 million people getting killed.

"That kind of situation should not arise again."

"There are a lot of problems like violence, killing of innocent people, children dying of starvation... We cannot ignore these. The major problem is suffering and we must have the ability to reduce and ultimately eradicate it with the compassion and promoting a sense of oneness."

"This cannot be done by prayers but by utilising human intelligence properly which, in turn, will create happy individuals, family, community and world to build a peaceful century," he said adding education and awareness must create compassion among the people of 21st century.

Maintaining that the religion and faith alone will not herald peace, the spiritual leader, "We must encourage individuals to debate, raise questions, investigate, analyse, create a strong platform of dialogue to solve problems for peace."

He said India can make a significant contribution in this regard by reviving its age-old sophisticated philosophy and traditions of 'karuna' (piety) whose foundation lies in 'ahimsa' (non-violence).

"According to India's ancient secular tradition of respect for all religion and also respect for non-believers, it is possible to create a happy society and community where every individual is capable of inner peace, irrespective of the religion they belong to," the spiritual leader said.

He urged people to promote 'karuna' through education and a logical approach was very important to build a peaceful century.