The development comes as a setback to the Congress, which recently lost Uttarakhand to the BJP. 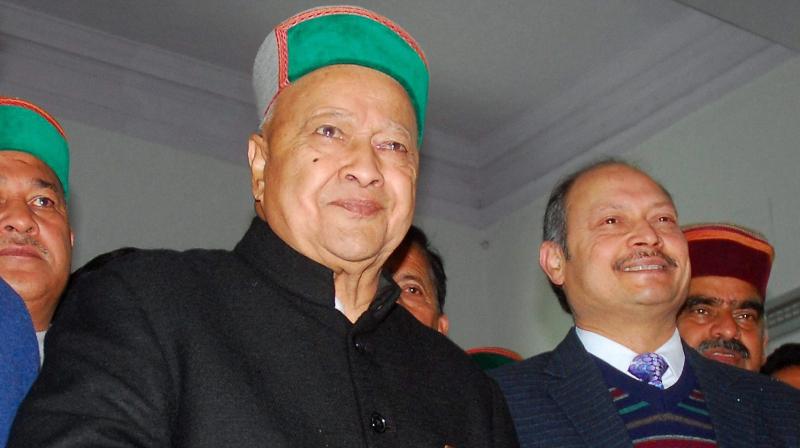 New Delhi: The CBI on Friday chargesheeted Himachal Pradesh chief minister Virbhadra Singh, his wife and nine others in a disproportionate assets case.

The chargesheet was filed within hours of the Delhi high court dismissing a plea filed by Mr Singh seeking quashing of an FIR filed by the CBI. The high court also removed an interim stay on his interrogation or arrest.

The development comes as a setback to the Congress, which recently lost Uttarakhand to the BJP. The corruption case could snowball into an electoral issue as Himachal Pradesh is set to go to the polls later this year.

The BJP which is riding high on sweeping wins both in Uttar Pradesh and Uttarakhand would rake up the charges against the sitting CM during campaigning.

The CBI filed the chargesheet before special judge Virender Kumar Goyal against Mr Singh, his wife Pratibha Singh and nine others under Section 109 (abetment) of the IPC and the Prevention of Corruption Act.

The chargesheet also names LIC agent Anand Chauhan, who is in judicial custody. He was arrested by the Enforcement Directorate on July 9 last year in a money-laundering case which is linked to the present CBI case as well.

The chargesheet, filed under Sections 109 (abetment) and 465 (punishment for forgery) of the IPC and under various Sections of the PC Act claims that the politician had amassed assets worth around `10 crore disproportionate by 192 per cent of his total income during his tenure as a Union minister. The chargesheet mentions about 225 witnesses and 442 documents.

Earlier Justice Vipin Sanghi of the Delhi high court while dismissing Mr Singh’s plea for quashing of the FIR lodged by the CBI in connection with the DA case also vacated the Himachal Pradesh high court’s interim order of October 1, 2015 restraining the CBI from arresting, interrogating or filing a chargesheet in the case without the court’s permission.

Both Mr Singh and his wife had claimed in their plea that there was no order, direction or judgment by any court that had authorised the CBI to inquire, investigate or register regular cases and exercise jurisdiction in the territory of Himachal Pradesh.

In October, 2015, Mr Singh got an interim order from the Himachal Pradesh high court restraining the CBI from arresting, interrogating or filing a charge sheet in the case without the court’s permission.

The matter was subsequently transferred by the Supreme Court to the Delhi high court, which in April last year asked the CBI not to arrest Mr Singh and had directed him to join the probe.