Prateek Yadav and Aparna Yadav, the younger son and daughter-in-law of Mr Mulayam Singh Yadav, were also present there. 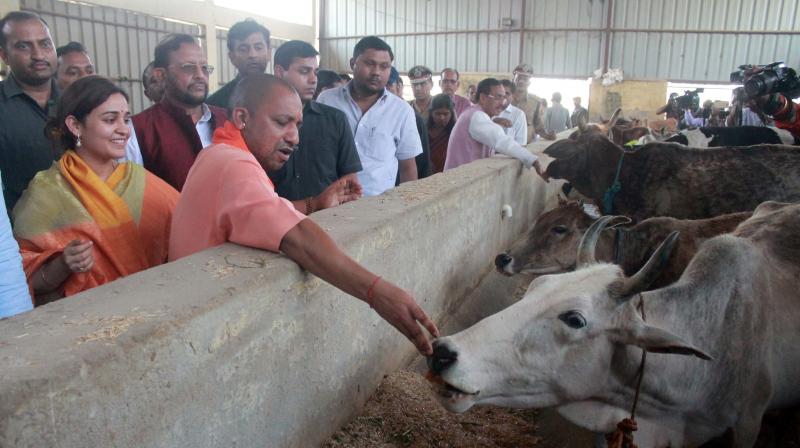 Accompanied by deputy chief minister and former Lucknow mayor Dinesh Sharma, who initiated the project in 2010, the chief minister spent about 30 minutes in the “gaushala” and fed cows.

Prateek Yadav and Aparna Yadav, the younger son and daughter-in-law of Mr Mulayam Singh Yadav, were also present there. The couple runs a non-governmental organisation called Jeev Ashray that plays an active role in the running of the Kanha Upvan. The couple, sources said, had invited the chief minister to visit the cow shelter when they paid him a courtesy call last week.

Their presence at Kanha Upvan during the chief minister’s visit has triggered off speculations of Aparna inching closer to the Bharatiya Janata Party.

Ms Aparna has, more than once, caused embarrassment to the Samajwadi Party in the past when she publicly praised Prime Minister Narendra Modi and his policies.

Ms Aparna, who lost the recent elections to Dr Rita Bahuguna Joshi from Lucknow Cantt seat, also kept speculations alive when she said, “Who knows what will happen in future?”

She was responding to questions about her possibly joining the BJP.

However, she said she had invited the chief minister to visit the animal shelter because she was aware of his love for animals, cows in particular.

“Moreover as chief minister, he belongs to the entire state and not just one party,” she added. The Kanha Upvan is spread over 64 acres and has over 2,000 stray animals.

Ms Aparna had sprung a surprise earlier too when she was present at an event in Lucknow addressed by Prime Minister Narendra Modi. Last year she had clicked a selfie with Mr Modi at a family function that he attended.