There are two hotspots each in Uttar Pradesh, Delhi, Kerala and Maharashtra and one each in Gujarat and Rajasthan 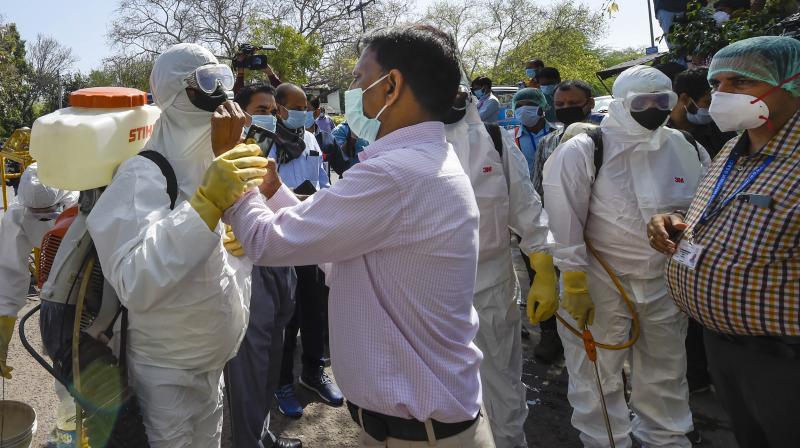 Health workers prepare to sanitise an area near Nizamuddin mosque, after people who attended the religious congregation at Tabligh-e-Jamaat's Markaz, tested postive for COVID-19, in New Delhi. PTI image

New Delhi: The government is focusing its attention on 10 hotspots' across the country in its effort to control the spread of COVID-19, which has infected more than 1,200 people and claimed at least 35 lives. There are two hotspots each in Uttar Pradesh, Delhi, Kerala and Maharashtra and one each in Gujarat and Rajasthan:

Nizamuddin West: Famed for the shrine of the 14h century Sufi mystic Khwaja Nizamuddin Auliya, the south Delhi locality has emerged as an epicentre for spread of the coronavirus in different parts of the country after thousands of people took part in a Tablighi Jamaat congregation from March 1-15.

Six people who died in Telangana and one in Jammu and Kashmir attended the congregation in the headquarters of the Tablighi in Nizamuddin West, a colony split between the labyrinthine lanes near the dargah' and spacious residential homes.

In Delhi alone, 24 participants tested positive for the disease. Besides, 441 of the participants were hospitalised after they showed symptoms. The number is likely to swell significantly as more test reports come.

Dilshad Garden: The northeast Delhi locality made headlines when a woman with a travel history to Saudi Arabia tested positive for coronavirus and infected her daughter as well as two relatives in Jehangirpuri close by.

She also came in contact with a mohalla' clinic doctor in Maujpur, who was infected with the disease. The doctor, who is believed have come into contract with hundreds of people, later transmitted the infection to his wife.

A senior health department official added that they feared the number could have spiked in Dilshad Garden but there has thankfully been no significant rise in the number of patients in the locality. It counts for about 11 per cent of Delhi's count of more than 100 coronavirus cases.

Bhilwara: Of the total 83 coronavirus positive cases detected in Rajasthan, 26 are from the textile town of Bhilwara. Eight patients have tested negative after treatment.

A massive screening exercise is underway with over 26 lakh people in urban and rural areas being screened.

Two coronavirus positive deaths have taken in Bhilwara but officials maintain that they died due to co-morbid conditions.

A doctor of a private hospital was the first positive case in Bhilwara. Most of the cases that have come up so far either are of hospital staff or the patient who had gone for treatment at hospitals.

Noida: Gautam Buddh Nagar adjoining Delhi in western Uttar Pradesh has so far recorded 38 COVID-19 cases, the highest for any district in the country's most populous state.

About two dozen of these cases are linked directly or indirectly to a private firm in Noida which has now been booked for endangering people's lives and sealed.

An estimated 626 samples have been tested so far and 1,852 people are under surveillance across Noida and Greater Noida, while another 291 have been quarantined at various isolation facilities in the district, local Health Department officials said.

On the brighter side, six of the patients have so far recovered in Gautam Buddh Nagar and discharged from hospitals till Tuesday, leaving 32 active cases of coronavirus, they added.

Meerut: The western Uttar Pradesh district is the second hotspot in the state, where the number of cases has crossed the 100 mark, with 19 people testing positive for the disease.

Of the 17 samples tested on Monday, six were declared positive, officials said. Of the six, four are family members of a man who recently returned from Maharashtra. The first COVID-19 case was reported from here last Friday.

Mumbai: After several cases of random people testing positive for COVID-19 emerged on Monday in Mumbai, the state health department declared Koliwada area of Worli and the Goregaon suburb as two hotspots.

In Mumbai, the novel coronavirus has claimed eight lives and there are 167 positive cases.

As of now, there are 230 COVID-19 positive cases detected in Maharashtra. Of these, 10 lost their lives and 39 people have been discharged after recovery. There are 181 active cases of COVID-19 in the state.

Pune: Forty-six cases were reported as on Tuesday. The first two positive cases in Maharashtra were reported from Pune on March 9.

Pune Municipal Corporation's chief health officer Dr Ramchandra Hankare said one COVID-19 patient died of multi-organ failure in a private hospital on Monday. Barring two people who are critical, rest of all the patients are stable and recuperating in the hospitals, he said.

So far 3,500 people including those who have foreign travel history, their close contacts have been "home quarantined".

According to officials, 2,216 passengers are under surveillance. Of these, 1,403 have completed their 14-day incubation period and 813 are still under active surveillance.

Ahmedabad: Of 73 coronavirus cases registered in Gujarat so far, the highest number of 23 cases has been detected in Ahmedabad district, mostly in Ahmedabad city.

Ahmedabad city counts for three of six deaths in Gujarat. Of the five persons who have recovered so far, four are from Ahmedabad city.

"Ahmedabad city has been declared as hotspot to prevent spread of the virus in a particular area after a positive case surfaces. Ideally, a three kilometre km area surrounding the residence of that patient is contained for 14 days. It's like a total lockdown. No one can come inside or go outside except the health staff," said Dr Prakash Vaghela, additional director, Public Health, Gujarat.

Kasaragod: Kasaragod is one of the worst affected districts in the country with the number of positive cases standing at 99, while over 7,725 people are under observation. A total of 163 people are in isolation wards.

Contact with already infected persons and possible infection from foreign returnees are seen as the causes of virus spread.

Pathanamthitta: Pathanamthitta may have reported lesser number of positive cases at five, but 7,254 people are under observation.

Both these districts have not reported any death so far.