India   All India  01 Apr 2020  Indore blows up into Covid hotspot as authorities zero in on 31 Tablighi congregants in MP
India, All India

Of the 107 people from Madhya Pradesh who attended meeting in Old Delhi, 31 traced to two religious places in Bhopal 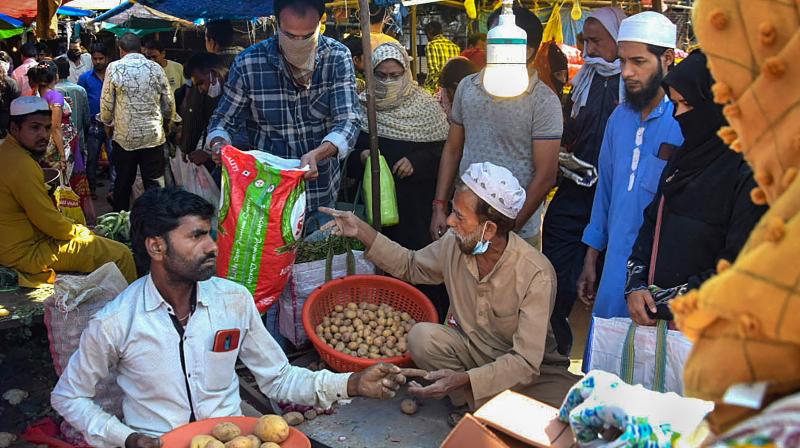 Social distancing thrown to the winds as people of Bhopal purchase vegetables during the open window available to them each day under the 21-day nationwide lockdown imposed to contain the coronavirus. (PTI)

Bhopal: The government of Shivraj Singh Chouhan is trying to reach out to people who attended a Tablighi Jamaat religious congregation in old Delhi earlier this month and returned to Madhya Pradesh thereafter.

Health officials in Madhya Pradesh were alerted after the death in Telangana of six people who had all participated in the event, strongly indicating that the Covid-19 virus had spread widely in that congregarrion.

Intelligence operatives have sent inputs to the state government that at least 107 people from Madhya Pradesh attended the event in Old Delhi; of them 31 people could be traced to two religious places in Bhopal.

Many of these congregants left for MP in haste after a nationwide curfew was announced for March 22 followed by a total lockdown on March 25.

Chief minister Shivraj Singh Chouhan on Tuesday convened a high-level official meeting to take stock of the situation in the wake of this development.

He ordered health authorities to identify each of these participants who attended the Tablighi Jamaat conference and quarantine them.

Alarms also went off in the Madhya Pradesh government with the industrial city of Indore emerging as a new hotspot of the outbreak, reporting 25 new Covid positive cases in the last 24 hours.

Seventeen of these positive cases were reported on Tuesday and eight on Monday.

A senior Indore district officer told this newspaper that a stringent lockdown will now be imposed on the city.

At the review meeting, the chief minister expressed serious concern over the spike in Indore.

One death took place today, at the AIIMS, Bhopal.