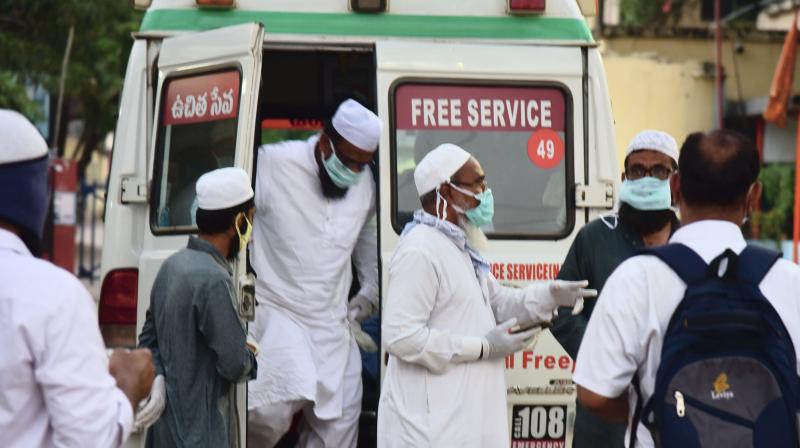 Nationwide, people who attended the Tablighi Jamaat congregation in Old Delhi from March 10-13, such as these people from Nalgonda and Miryalaguda in Telangana, have come forward to be tested for the Covid-19 virus after reports emerged that the coronavirus spread that meeting. (PTI)

Chennai: Following the nationwide alarm over the spread of the Covid-19 infection from the Tablighi Jamaat meeting in Old Delhi last week, 18 men who took part in that meeting voluntarily went to the medical authorities in Chennai on Tuesday to have themselves tested.

It was reported in the media later that they all tested positive.

The 18 men from Medavakkam and Pallikaranai, according to a video clip posted in Facebook by one of them on Wednesday, were taken to the Chengalpattu Government Hospital and made to wait the whole day. They were given no food until evening and were never subjected to any medical test.

Yet some media houses declared that they had tested positive for Covid-19.

In the video, the men are seen idling in the ward with no social distancing and no signs of any treatment given to them.

Following an appeal by the government, the men contacted the authorities on their own. They were reportedly asked to go the government hospital at Medavakkam at around 10.00 am Tuesday. At around 3 pm they were taken to Chengalpattu in an ambulance.

Though not even blood samples were taken from them, some media organisations reported that 18 persons from Pallikaranai had tested positive for the coronavirus Covid-19, the man speaking in the video said, adding that such reporting would create panic among their relatives and neighbours.

Tamil Nadu chief minister Edappadi K Palanisamy and health secretary Beela Rajesh have been asking people who participated in the Tablighi Jamaat conclave in Nizamuddin Markaz to voluntarily come forward to be tested for the virus.

It is said that more than 500 persons from Tamil Nadu attended the meet. There were some 300 foreigners as well.

Tablighi Jamaat is a non-political global Sunni Islamic missionary movement that was born at Mewat in India in 1927. It has followers all over India.