Telangana, West Bengal, Karnataka, Gujarat and J&K are among states to have reported covid cases linked to this congregation 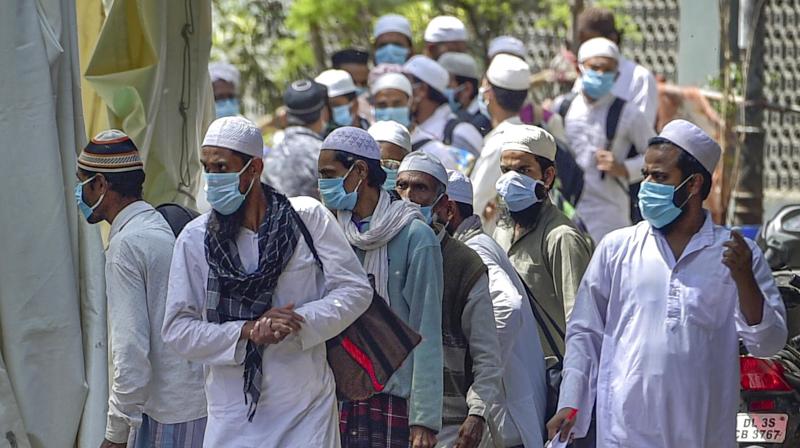 People who came for ‘Jamat’, a religious gathering at Nizamuddin Mosque, being taken to LNJP hospital for COVID-19 test, after several people showed symptoms of coronavirus, during a nationwide lockdown, in New Delhi. PTI image

New Delhi: Authorities launched a nationwide search on Tuesday for participants of a huge religious gathering held earlier this month in the national capital's Nizamuddin area, which has become the new epicentre of the deadly virus pandemic amid fears that thousands present there could have carried the infection to the length and breadth of the country.

Thousands of participants of the Tablighi Jamaat held in mid-March in Nizamuddin, which also is home to a famous Dargah, are known to have returned to their homes in virtually every state including Telangana, West Bengal, Karnataka and Gujarat. Many of these states have reported COVID-19 cases linked to this congregation.

Several fresh cases of infection were reported on Tuesday from Delhi, Maharashtra, Kerala, Uttar Pradesh, Tamil Nadu, Gujarat, Jammu and Kashmir and Bihar, among other places, taking the nationwide tally well past 1,400 with at least 45 deaths, as per figures announced by government officials in different states.

But, a consolidated official tally announced later in the evening by the Union Health Ministry put the total number of confirmed cases at 1,397 and 35 deaths, marking an increase of 146 positive cases and three deaths since Monday night -- two in Punjab and one in Maharashtra.

However, this apparently did not include six deaths reported by Telangana government last night, all of who had attended the Nizamuddin congregation.

While the Union Health Ministry's tally, updated as on 8.30 PM Tuesday, put the total number of confirmed cases in Tamil Nadu at 74, the state government put its aggregate number at 124, with at least 77 of them having links to the Tablighi Jamaat.

For Maharashtra also, the Centre's tally was 216, but the state government officials put the figure at 302 with an increase of 82 in a day.

Officials have been saying that some mismatch occurs due to delay in assigning certain cases to a particular state after doing necessary checks.

According to the Health Ministry data, active COVID-19 cases stands at 1,238, while 123 people have been either cured or discharged and one had migrated.

The central government separately told the Supreme Court it has taken "proactive and preemptive timely steps" to deal with the coronavirus pandemic, but termed fake news as the biggest hindrance and sought a direction for the media not to publish any COVID-19 information without ascertaining facts with authorities.

The apex court asked the Centre to prevent migration of people due to coronavirus and to set up within 24 hours a portal for disseminating real time information on the pandemic to counter the panic being spread through fake news.

It also said "panic will destroy more lives than the virus" and asked the Centre to get trained counsellors and community leaders of all faiths to calm down the migrants, rather than the police to avoid use of force and intimidation.

The Union Health Ministry lamented that the number of hotspots has risen due to "lack of people's support and delay in timely detection" of the cases.

Within the national capital, more than 1,100 people who attended the congregation have been quarantined while at least 441 have been hospitalised. The government is screening all those who participated in the event, officials said.

Agarwal, however, said it was not the time to find faults but to take action.

In the national capital alone, at least 24 people who took part in the religious congregation, Tablighi Jamaat, have tested positive for the novel coronavirus, Delhi Chief Minister Arvind Kejriwal said, as he slammed the organisers for being "highly irresponsible" on their part to hold such an event at a time when thousands have died in other countries due to the pandemic.

It also said that all state police have been asked to locate Indian Tabligh Jamaat workers from local coordinators, followed by their medical screening and quarantine.

So far, 2137 such people have been identified and are being medically examined and quarantined, while more would be located, the Ministry said.

Several state governments, including in West Bengal, Assam and Manipur, said they are taking steps to locate participants of the Nizamuddin event.

Karnataka government said 54 people from the state had attended the event, out of which 13 have been identified but they have tested negative for the COVID-19.

Gujarat police also launched a probe to identify all the attendees from the state and said primary investigations has revealed that some persons from Bhavnagar had attended the congregation.

A Srinagar-based businessman is being seen as the "super-spreader" in this entire case as he travelled by air, train and road to Delhi, Uttar Pradesh and back to Jammu and Kashmir before he died of COVID-19 on March 26, raising fears he may have infected many others along the way, officials said on Tuesday.

Six people in Telangana who attended the meeting in the city's Nizamuddin West area also died on Monday.

In Andhra Pradesh, officials said more than half of the 40 people who have tested positive for coronavirus in the state were linked to the Nizamuddin event.

Including the 24 new cases related to Nizamuddin, the total number of confirmed cases in Delhi was seen nearing 100, while Maharashtra reported 72 new coronavirus patients in the state including 59 in Mumbai.

Kerala also reported 7 new cases, taking the total number of those affected in the state to 215. The state also reported its second death from COVID-19.

Fresh deaths were also reported from West Bengal and Punjab, among other places.

The government, however, asserted that there is no shortage of medicines to combat the deadly virus outbreak and the Department of Pharmaceuticals is regularly monitoring distribution and addressing issues with the help of other departments, states and Union Territories.

Seeking cooperation from the public to fight the pandemic, the Union Health Ministry officials said there was no need to panic. They also said not everyone needs to wear masks and that following social distancing is more important to prevent the spread of COVID-19.

Separately, a petition was filed in the Supreme Court seeking a direction to the Centre and authorities concerned to provide free of cost testing facility for COVID-19 to all citizens in the country.

The plea has also sought a direction to the authorities for ramping up the testing facilities for COVID-19 at the earliest "given the escalating mortality and morbidity rate across the country".

Globally, the COVID-19 tally has crossed 8 lakh confirmed cases, while more than 37,000 people have died.