India   All India  01 May 2017  Prez salute to ‘Armourednagar’: Honour, glory, pride for cavalry
India, All India

The President’s Standard is in the traditional colours of the ACC&S, with red signifying sacrifice & courage, and gold honour & achievements 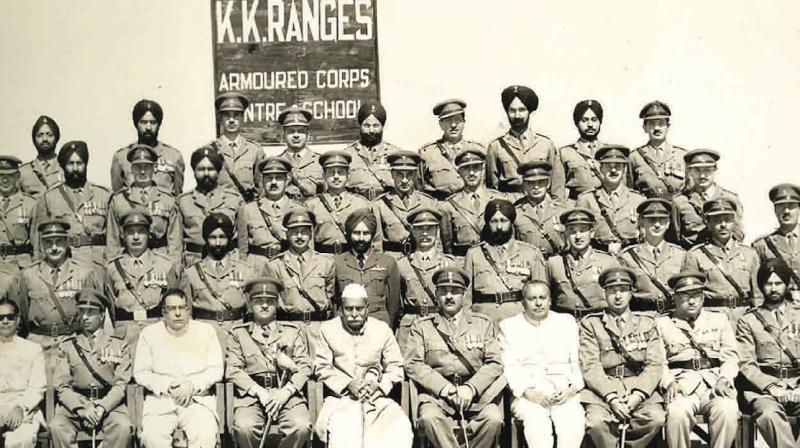 President Pranab Mukherjee, the supreme commander of India’s armed forces, presented the Standard to the Armoured Corps Centre and School (ACC&S) at Ahmednagar in Maharashtra on April 15 at its parade ground, with the impressive Cavalry War Memorial. The ACC&S is the first of the Indian Army’s regimental centres to be accorded the honour of the President’s Standard and the event was befittingly held in the 100th year of the battle tank. For ACC&S this was a second presidential visit, the first being by President Rajendra Prasad.

The ACC&S, which imparts technical and tactical training to personnel of the mechanised forces, has maintained itself as an institution of excellence for mechanised warfare, as was proved in the 1965 and 1971 India-Pakistan wars, when Indian tank crews destroyed disproportionately large numbers of Pakistani tanks, apart from redefining mountain warfare by fighting at very high altitudes like Zoji La, 14,000 feet (1947-48) against Pakistan; Chushul, 16,000 feet against the Chinese and now deployed at even higher altitudes in the northern and eastern Himalayas.

The President’s Standard is in the traditional colours of the ACC&S, with red signifying sacrifice and courage, and gold honour and achievements. The crest has an armoured fist in between two arrows shaped like a horseshoe, symbolising firepower with speed, momentum and flexibility and firepower, with which armour is applied in a concentrated manner at the point of decision.

In its glorious past spanning over 240 years — as cavalry till 1939 and armoured corps thereafter — its indomitable and gallant personnel have been awarded two Victoria Crosses, two Param Vir Chakras, 16 Maha Vir Chakras and 52 Vir Chakras, among numerous other gallantry awards.

This standard presentation ceremony was unique in that, for the first time ever, it included marching, horsed cavalry and tank contingents in one single standard presentation parade. The mechanised contingent comprised one Arjun, the standard-bearer tank, five T-90 Bhishmas and six T-72 Ajeya tanks. The brass and pipe bands of the ACC&S, Mechanised Infantry Regiment Centre and Guards Regiment Centre performed  in support of the parade.

The standard presentation was preceded by two reunions of veterans. The first was the three-day Cavalry Veterans’ Reunion at ACC&S, for those over the age of 65 years. Such is the spirit of the veterans that while the age bar for this reunion was 60 years, the response was so overwhelming that it had to be raised to 65 years so that all officers, junior commissioned officers and other ranks could be accommodated.

This reunion was indeed a great treat for the veterans for a number of reasons. One is that most of them were seeing the ACC&S in its rightful spread of space — aptly referred to as “Armourednagar”. Many of these veterans had trained or been posted at ACC&S when the Ahmednagar military garrison area was occupied by two major defence ministry organisations — Vehicle Research and Development Establishment (VRDE) and Controllerate of Inspection Vehicles (CIV) — which resulted in all training and administrative establishments of the ACC&S functioning in cramped spaces and buildings. It was only after VRDE and CIV were shifted to Arangaon, about 22 km away, that it could get proper space. The other major reason was meeting old friends and coursemates after decades, and thereby feeling decades younger. Another reason was the bonding of the veterans with serving personnel in the Army, which while not officially in a state of war, is otherwise very operationally active in a state of low-intensity warfare. Besides, these there are many familial affiliations in the Armoured Corps, with no dearth of two generations and sometimes also three and even four generations, like one Ahlawat family of Skinner’s Horse.

The entire lot of veterans and their spouses were kept pleasantly and informatively occupied by the activities of “Armourednagar Darshan” horse and cycle polo matches, interactions between all ranks at the “burra khaana” and a unique sit-down dinner at the Cavalry Tank Museum, the only one of its kind in Asia.

At this reunion, the oldest veterans were two former Army Chiefs, Gen. V.N. Sharma and Gen. Shankar Roychowdhury, and the youngest serving officers and soldiers hosting the veterans were in their early twenties upwards.

The second reunion, shortly afterwards, was the Platinum Veterans’ Lunch, for those over 75 years, at the Sabre Officers’  Mess Lawns at Delhi Cantonment. This was a classic example of the spirit being more than willing, no matter how weak the flesh may have become. Here again the decades of age just disappeared for a few hours at least. This one was organised by the Directorate-General of Mechanised Forces (DGMF) and the Cavalry Officers’ Association (COA), both of who were warmly thanked by the veterans.

Any account of ACC&S or Ahmednagar would be incomplete without some mention of the rare tank museum and monuments reflecting Ahmednagar’s unique history.

The Cavalry Tank Museum, one of its kind in Asia, was developed by ACC&S and inaugurated by former Army Chief, the late Gen B.C. Joshi, in 1994. It displays tanks, armoured cars and recovery vehicles and specialised tanks developed for aircrew recovery, bridge-laying, mine detonation and amphibious tanks, used and captured by the Allied forces in World War II, which included 250,000 Indian personnel, who were a major war-winning factor.  Also displayed are the Indian Army’s former Stuart tanks, used at Zoji-La in 1947-48, French AMX-13 tanks,  used against the Chinese at Chushul in 1962, the British World War II-vintage Centurions, used with lethal effect against Pakistan in 1965 and 1971, and also the Soviet-Russian PT-76 amphibious light tanks, used against the Pakistanis in erstwhile East Pakistan in the 1971 war which led to the liberation of Bangladesh. The Japanese and German tanks displayed are those captured by the Allies during WWII. The Rolls Royce armoured car, a prized asset of the museum, was made in 1914 and used in both world wars. A model of the same type was used by the infamous Gen. Dwyer in the Jallianwala Bagh massacre. The museum’s two memory rooms display photographs and citations of all gallantry awardees of the Armoured Corps.

The historic monuments in and around ACC&S are the scenic Fariah Bagh, with an impressive Persian-style monument in its centre, Salabat Khan’s tomb atop a hill, and among many others Ahmednagar Fort, also known as Kot Bagh Nizam, built in 1490 by Ahmed Nizam Shah, after whom Ahmednagar was named and rebuilt with the present stone masonry with the moat around it in 1553-1565 by Hussein Nizam Shah. Jawaharlal Nehru, Maulana Abdul Kalam Azad, Sardar Vallabhbhai Patel, Pandit Govind Vallabh Pant, Pandit Hare Krishna Mehtab, Acharya J.B. Kripalani, Acharya Narendra Dev, Dr Syed Mahmud, Dr B. Pattabhi Sitaramayya, Asaf Ali and Dr P.C. Ghosh were among the many who were secretively imprisoned here from August 1942 till April 1945.

Another interesting bit of Ahmednaga’sr history is that during World War I, when the British used a part of the garrison as a prisoner of war camp, over 20 young captured German soldiers died of plague. One of Ahmednagar’s cemeteries has a plot of their graves.