India   All India  01 May 2020  Here's how ambulance difficulties are killing non-Covid-19 patients
India, All India 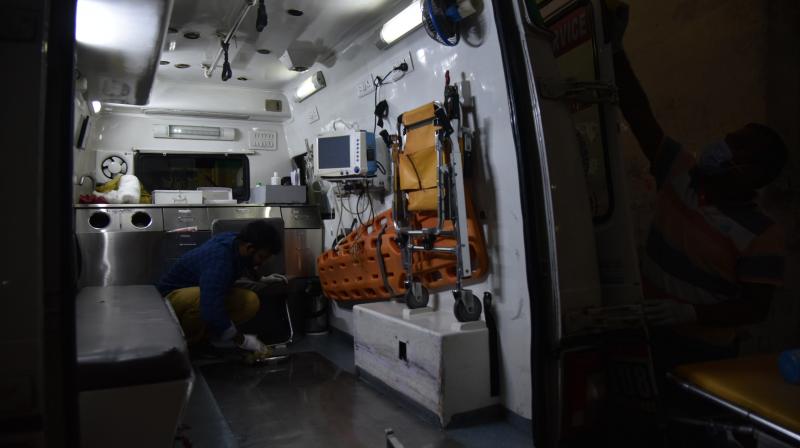 People are hesitating to call an ambulance in time due to fear of coronavirus, and due to the drivers' hesitation. (DC Photo by SSR)

Hyderabad: The Covid-19 pandemic is having some unforeseen effects on non-Covid-19 patients, a survey has found.

Carried out by emergency specialists in private hospitals, the survey found that in 15 top hospitals in Hyderabad reported a 45 per cent increase in the number of ‘brought dead’ non-Covid-19 patients in April. The number was 157 in March and surged to 229 in April. In fact, seven of the hospitals had 70 such cases in March and 127 in April, an increase of 80 per cent.

The doctors discerned two reasons feeding this phenomenon: there is fear of going to hospitals as they may be hotspots of Covid-19; and there are difficulties in getting ambulances these days.

Even if an ambulance does turn up, there is a delay in getting to hospital as the drivers have first to screen for coronavirus markers--fever, cough and breathlessness. But then breathlessness can not only be because of Covid-19 but also due to lower functioning of heart, kidneys, or panic and anxiety attacks and severe shock to the body.

Dr Sateesh Kumar Kailasam, director of Medicover Institute of Emergency Medicine, said we are in a vastly changed situation. “Earlier, people knew the symptoms and came in early. This helped doctors in containing paralytic attacks, brain strokes and heart attacks within the golden hour. Now it is different. It is very disturbing as lives are being lost due to fear.”

Simply put, Covid-19 has expanded the time between distress signal and medical attention for non-Covid-19 patients. In one case recently, a 32-year-old male software engineer felt a tingling sensation for three days at a stretch but did not consult a doctor. His family took him to a hospital only after he had suffered a paralytic stroke.

Then, a 45-year-old male with low sugar levels consulted a doctor on the phone but did not call back for an update, and suffered a major heart attack three days later.

In consultations with family members, doctors have found that reluctance on the part of ambulance drivers to rush to patients, police questioning and fear of the virus are all making them wait rather than act.

Dr A Sai Ravishanker, a senior interventional cardiologist at Continental Hospitals, said, “Fear of Covid-19 is justified but it does not mean that people must not seek help. Telemedicine consultations are possible. The survival of patients prone to strokes who come late will require high intervention in terms of medicines, longer hospital stay and higher costs. We are seeing a reverse cycle now where there is a major delay and that is a worry.”

Earlier, every gastric pain was considered a heart attack and people rushed to hospitals but the reverse is being observed now.

In the suburbs of Hyderabad, people used to rush to hospital after thorn pricks, bee stings and insect bites but now would rather not. This can aggravate such ‘minor’ cases, leading to sepsis and shock deaths. A thorn prick led to sepsis in the case of a 20-year-old woman as she was brought in too late and the infection had spread.

These are preventable deaths. Losing patients to preventable diseases is worrying the medical community and they have urged the government to create confidence by educating ambulance drivers to ferry those with medical conditions to hospitals without delay.