India   All India  01 May 2020  Kurnool civic body chief shunted over denial of burial of covid victims
India, All India

With 386 Covid positive cases in Kurnool district alone, the curve is going up without showing any signs of flattening 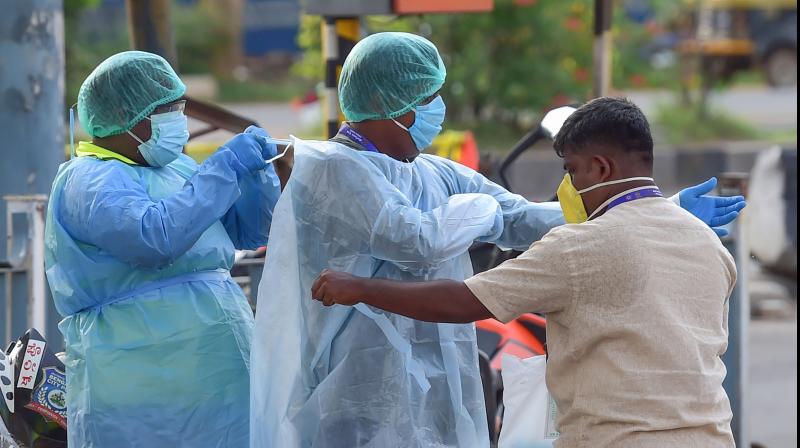 Civil defence officials wear protective suits to help a man who was lying on the roadside near Hebbal flyover during a nationwide lockdown imposed in the wake of novel coronavirus pandemic. PTI Photo

Kurnool: The Kurnool Municipal Commissioner has been shunted out after Chief Minister Jagan Mohan Reddy expressed shock and anger at the goings-on in Kurnool. The CM particularly was referring to a Deccan Chronicle report on Thursday ‘Burying Covid patients turns a tough task’.

With 386 Covid positive cases in Kurnool district alone, the curve is going up without showing any signs of flattening,  and officials predict that deaths could spike, necessitating hassle-free burial services.

Consequently, an IAS officer who was working at the Integrated Tribal Development Agency (ITDA) Paderu, has been posted as commissioner of the Kurnool Municipal Corporation.  Already five IAS and two IFS officers were brainstorming daily to contain Covid-19 cases.

However, the results were not satisfactory as they could not micromanage the tracing and testing of those who may have contracted the disease.

Ravindrababu, the outgoing KMC commissioner said he sought the transfer as he was not doing well health-wise.

Ravindrababu, the outgoing KMC commissioner said he was doing all the work personally, going into the colonies and maintaining cleanliness and spreading disinfectants.

A ground-level revenue official succinctly described the ineffective Covid containment strategies of the district administration as due to a lack of trust and confidence in ground level staff by District Collector G. Veera Pandian. He said the Collector does not believe in delegation of authority and practices command and control. This is why he was not successful in getting the required results.

Tahsildars and village level officers have become inactive with the introduction of volunteers by the Y.S. Jagan Mohan Reddy government. As the volunteers has been given the task of supervising 50 households, the Revenue staff is not working at the grassroots and is just depending on reports sent by nodal officers once in a while. This is the real problem in Kurnool district.

Revenue divisional officers, who are directly interacting with the lower level officers in their respective jurisdictions, were also facing the same problem as the tasks given by the district collector were not executed by the grassroots staff.

Kurnoool City alone has more than 231 Covid positive cases. On an average, at least 10 cases have been reported every day for the past week. The district has 386 positive cases to date, according to the state bulletin issued by the Government of Andhra Pradesh.