India   All India  01 Jun 2020  PM Modi pitches for Made in India products in healthcare
India, All India 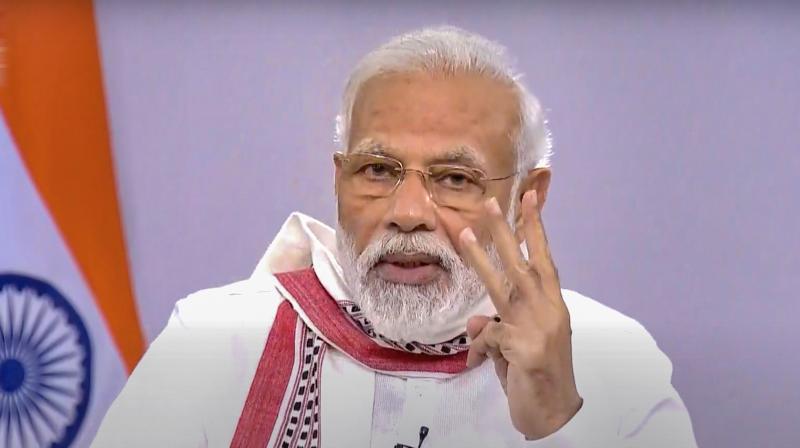 New Delhi: The world must unite and focus on "humanity-centric" aspects of development, Prime Minister Narendra Modi said on Monday, noting that advancements nations make in the health sector will matter more than ever as countries battle the Covid-19 pandemic. Modi sought discussion on advances in telemedicine, use of 'Make in India' products and IT tools in the medical sector for a healthier society.

Addressing the 25th anniversary celebrations of the Rajiv Gandhi University of Health Sciences in Bengaluru via video, he said today the world is facing one of the biggest crisis since the two world wars.

Like the world changed pre and post-World Wars, the same way the "pre and post COVID" world will be different, he said.

In these times, Modi said the world is looking up to doctors, nurses, medical staff and scientific community with hope and gratitude.

"The world seeks both care and cure from you," he said.

Seeking a global approach to deal with the health crisis, the prime minister said earlier, the debates on globalisation have focused on economic issues.

"Now, the world must unite and focus on humanity- centric aspects of development. Advancements nations make in the health sector will matter more than ever before," he told the gathering.

He said there were three things on which he would urge "maximum discussion and participation" and these include telemedicines, Make in India products in the health sector and use of IT-based tools.

He proposed work on new models that make telemedicine popular on a larger scale.

"The other is related to 'Make in India' in the health sector. The initial gains make me optimistic," he said.

Domestic manufacturers have started production of personal protective equipment and have supplied about one crore PPEs to COVID warriors, he pointed out.

He said similarly, manufacturers have supplied 1.2 crore 'Make in India' N-95 masks to all the states.

He also referred to the Aarogya Setu app to drive home his point on the use of IT tools for healthier societies.

"Twelve crore health conscious people have downloaded it. This has been very helpful in the fight against coronavirus," Modi said.

The prime minister also referred to cases of violence against healthcare personnel, saying such behaviour is not acceptable.

"Due to mob mentality, those working on the front-lines, those on duty be it doctors, nurses, Safai workers, others are subject to violence. I want to state it clearly - violence, abuse and rude behaviour is not acceptable," he asserted

An ordinance was recently issued to punish those involved in such incidents.

During the last six years, the government  took various initiatives in health care and medical education, he said, adding that the work has been divided into "four pillars".

He said preventive healthcare is the first pillar and it includes importance to Yoga, Ayurveda and general fitness.

The second pillar relates to affordable healthcare and Ayushman Bharat- the world's largest healthcare scheme -- is a fine example of it.

In less than two years, one crore people have benefitted from it.Women and those staying in villages are among the major beneficiaries of this scheme, he noted.

"The third pillar is improvements on the supply side. A nation like ours has to have proper medical infrastructure and medical education infrastructure.Work is underway to ensure a medical college or post-graduate medical institute in every district of the country," he said.

The country, Modi said, has seen rapid progress in setting up of 22 more AIIMS.

"Over the last five years, we have been able to add over thirty thousand seats in MBBS and fifteen thousand seats in post-graduation. This has been the largest increase in the five year term of any government since Independence," he said.

The fourth pillar, he said, is "mission mode implementation," of programmes.

The central government has recently approved the introduction of a new law for expanding education of more than 50 different allied and healthcare professionals.

This law, once passed, will address the shortage of  para-medical personnel in the country. It will also help India in supplying skilled resources to other countries, he said.