The death toll due to Covid-19 registered the biggest single-day spikes of 230 till Monday 8 am, total deaths at 5408 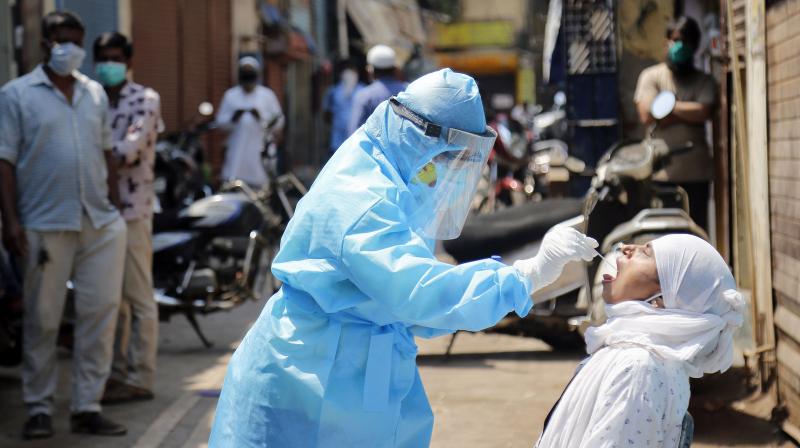 New Delhi: India is now at 7th position (ahead of France and Germany) in terms of the spread of the Covid-19 pandemic. On Sunday it jumped two positions due to the highest-one day increase so far with 8,392 new cases.

As India starts unlocking itself from the most stringent lockdown the country has ever seen, the number of novel coronavirus cases have started shooting up alarmingly raising concerns that the worst is yet to come.

The death toll due to COVID-19 registered the biggest single-day spikes of 230 till Monday 8 am, according to the Union Health Ministry.

Of the 230 deaths reported since Sunday morning, 89 are in Maharashtra, 57 in Delhi, 31 in Gujarat, 13 in Tamil Nadu, 12 in Uttar Pradesh, eight in West Bengal, seven in Madhya Pradesh, five in Telangana, three in Karnataka, two in Andhra Pradesh and one each in Bihar, Punjab and Rajasthan.

The death toll has reached 51 in Karnataka and 45 in Punjab.

Jammu and Kashmir has reported 28 fatalities due to the disease, Bihar has 21, Haryana has 20 deaths, Kerala has nine while Odisha has reported seven deaths so far.

Himachal Pradesh, Jharkhand and Uttarakhand have registered five COVID-19 fatalities each while Chandigarh and Assam have recorded four deaths each so far.

Meghalaya  and Chhattisgarh have reported one COVID-19 fatality each, according to the ministry's data.

More than 70 per cent of the deaths are due to comorbidities, according to the health ministry website.

According to experts, more than 60% of all new cases are still coming from hotspots in Maharashtra, Tamil Nadu, Delhi and Gujarat whereas as places like Jammu and Kashmir, Assam, Odisha, Bihar, Uttar Pradesh and West Bengal too are witnessing high number of fresh cases.

According to a report by experts from the Indian Public Health Association (IPHA), Indian Association of Preventive and Social Medicine (IAPSM) and the Indian Association of Epidemiologists (IAE) that had public health experts from AIIMS, JNU, BHU among others, the current spike in coronavirus cases in the country could have been avoided if migrants had been allowed to go home before the imposition of the lockdown when the disease spread was very low.

The experts said the returning migrants are now taking the infection to rural and peri-urban areas, in districts which had minimal cases and have relatively weak public health systems. The report has been sent to Prime Minister Narendra Modi.

India's nationwide lockdown from March 25 till May 30 has been one of the most "stringent" and yet COVID-19 cases have increased exponentially through this phase, that is, from 606 cases on March 25 to 138,845 on May 24, they said.

"The incoherent and often rapidly shifting strategies and policies, especially at the national level, are more a reflection of afterthought and catching up phenomenon on part of the policy makers rather than a well thought cogent strategy with an epidemiologic basis," experts said and suggested all data, including test results, should be in public domain for the research community to access, analyse and provide real-time context-specific solutions to control the pandemic.