As the word spread about the schoolteacher’s killing, Kashmiri Brahmin Hindus or Pandits, took to the streets at several places 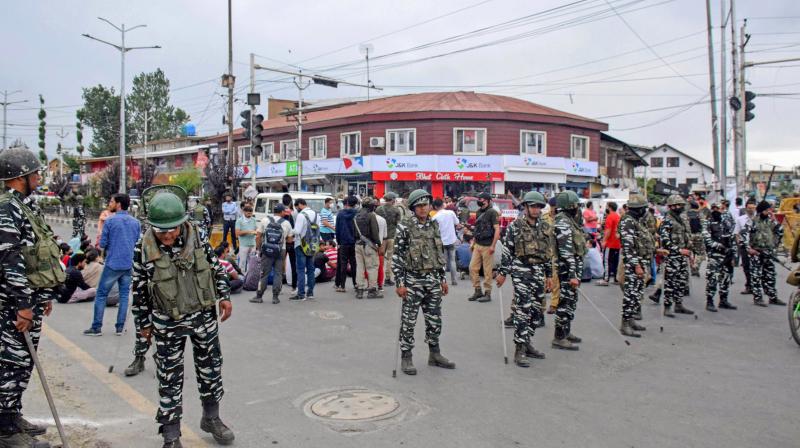 Security personnel stand guard as people from the Kashmiri Pandit community block a road to protest against the killing of the school teacher Rajni Bala, near Srinagar Airport, Tuesday, May 31, 2022. (PTI)

Srinagar: A woman Hindu schoolteacher was murdered in cold blood by suspected militants in Jammu and Kashmir’s southern Kulgam district on Tuesday. The gory incident sparked off protests by groups of Hindus, mainly government employees belonging to the Kashmiri Pandit community working in the Valley under the Prime Minister’s special job package, and voicing security concerns reinforced the demand to be relocated to Jammu or any other part of the country.

The police and local sources said Rajini Bala, 36, the latest victim of the target killings -- the seventh in the Valley so far in May -- was shot and critically wounded by unidentified assailants outside Government High School in Kulgam’s Gopalpora area, where she worked as a teacher, at 10.35 am. She succumbed to her injuries while being taken to hospital, the sources said.

A resident of Jammu’s Samba district, Ms Bala was working in the Valley after her recruitment as a teacher in the Scheduled Caste category. As the predominantly Muslim Valley has no SC population, the teachers’ posts reserved for SCs are filled by candidates from the Jammu region.

Ms Bala is the second schoolteacher from Jammu belonging to the SC category who has fallen to assassins’ bullets while working in the Valley. Earlier, Deepak Chand, who taught at Srinagar’s Government Boys Higher Secondary School, was along with Sikh principal Supinder Kour shot dead by masked men on October 7 last year. The police blamed the killings on The Resistance Front (TRF) which, it insists, is an offshoot of the banned Lashkar-e-Tayyaba militant group. The police later claimed that Mehran Yasin Shala, a top TRF commander involved in the murder of Chand and Kour, was along with two other militants Manzoor Ahmed Mir and Basir Dar gunned down in Srinagar’s Rambagh area on November 24 last year.

The police blamed Ms Bala’s murder on separatist militants too and said the “terrorists involved in this gruesome terror crime will soon be identified and neutralised”. It said the area was immediately cordoned off with the help of reinforcements and a search operation to capture the killers dead or alive was underway.

As the word spread about the schoolteacher’s killing, large groups of Kashmiri Brahmin Hindus, or Pandits, mainly government employees working in the Valley and often referred to as “migrant employees”, took to the streets at several places, including in Srinagar, to chant slogans against the killers and the government for its “failure” to protect the minorities in the Valley. A group of agitating migrant employees blocked traffic on the Srinagar-Jammu highway (NH44) at Vessu in Kulgam. It reiterated the demand for relocation either to Jammu or any other part of the country “as we don’t feel safe here”.

The “migrant employees” have been asking for relocation from the Valley even since one of their colleagues, Rahul Bhat, a revenue department employee, was shot dead by suspected militants inside his office in Chadoora town of central Budgam district on May 12.

Their representatives had at a meeting with J&K lieutenant-governor Manoj Sinha here last week, insisted on being relocated to Jammu or any other part of the country. Mr Sinha, condemning Ms Bala’s murder, said all those involved will be given an “unforgettable response”. He tweeted: “Terrorist attack on a schoolteacher Rajni Bala is the most reprehensible act. My deepest condolences to the bereaved family. Terrorists and their sympathisers will be given unforgettable response for dastardly attack.”