Thackeray and his wife performed the 'mahapooja' wearing face masks. 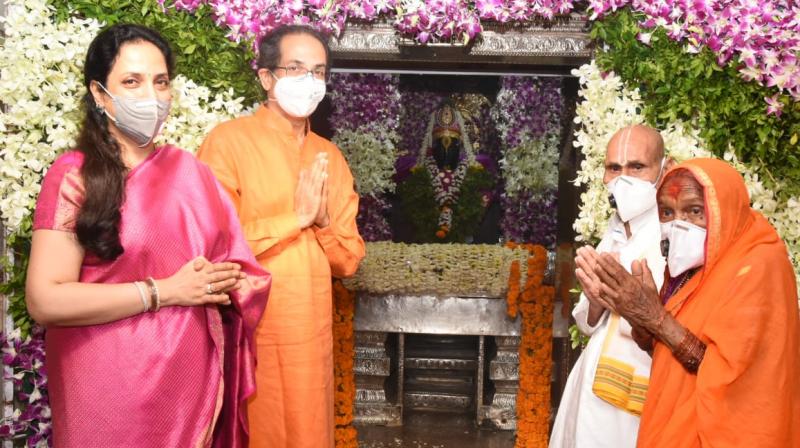 CM Uddhav Thackeray and his wife Rashmi at Pandharpur. (Twitter)

Pune: Maharashtra Chief Minister Uddhav Thackeray on Wednesday performed the 'mahapooja' of Lord Vitthal at Pandharpur on Ashadhi Ekadashi and said he prayed for a miracle to overcome the coronavirus crisis.

Ashadhi Ekadashi, an important day in the Hindu calendar, is the 11th lunar day of Ashadha month.

"I prayed to Mauli. We want to see a miracle. Show us a miracle. Human beings have given up. We don't have medicine. There is nothing. How to go on with life by covering the mouth with a strip," Thackeray tweeted after the 'mahapooja' at 2 am along with wife Rashmi.

Lakhs of warkaris (devotees of Lord Vitthal) from across Maharashtra and several other states throng the temple town in Solapur district each year on Ashadhi Ekadashi.

There were only a handful on Wednesday after the state authorities cancelled the annual 'wari' pilgrimage - characterised by people walking to Pandharpur with palanquins - due to spiraling coronavirus cases.

Maharashtra's coronavirus case tally rose to 1,74,761 on Tuesday with addition of 4,878 new patients while the death toll mounted by 245, including 57 fatalities in Mumbai, to 7,855, state health department said.

Thackeray and his wife performed the 'mahapooja' wearing face masks.

Speaking after the 'mahapooja', Thackeray said he prayed to Lord Vitthal to make the country coronavirus-free.

His son and state minister Aaditya Thackeray was also present at the 'mahapooja'. During the ritual, Aaditya apparently felt uneasy and returned to his car parked outside the temple for some time.

'Warkari' couple Vitthal Badhe and Anusuya Badhe, from Chinchpur-Pangul village in Pathardi taluka of Ahmednagar district, performed the mahapooja along with the Thackerays.

Curfew is in force in Pandharpur since Tuesday to prevent any gathering of people in the temple town, located around 350 km from Mumbai.

As the 'wari' processions were cancelled, 'padukas' (holy footprints) of saint-poets Dnyaneshwar, Tukaram and were brought to Pandharpur from Pune and Nashik in state transport buses.

The chief minister said he prayed for welfare of farmers and fulfillment of dreams and aspirations of people in the state.

He also handed over a cheque of Rs 5 crore to the Pandharpur Municipal Council and thanked the warkaris for cooperating with the government.

Thackeray said his government will take steps to develop Pandharpur. He said devotees should offer prayers at home on Ashadhi Ekadashi instead of thronging the town.

Thackeray is an avid photographer. In 2011, his book 'Pahava Vitthal' containing aerial photography of the annual Pandharpur wari, earned him praise from various quarters.

In March, when there were fewer cases of COVID-19 in Maharashtra, the chief minister had asked people to avoid going to crowded places and limiting Holi celebrations, adding, "I pray the coronavirus gets burnt in the Holi fire."