RDA has stated that this proposed Bill will increase corruption and decrease autonomy in medicine. 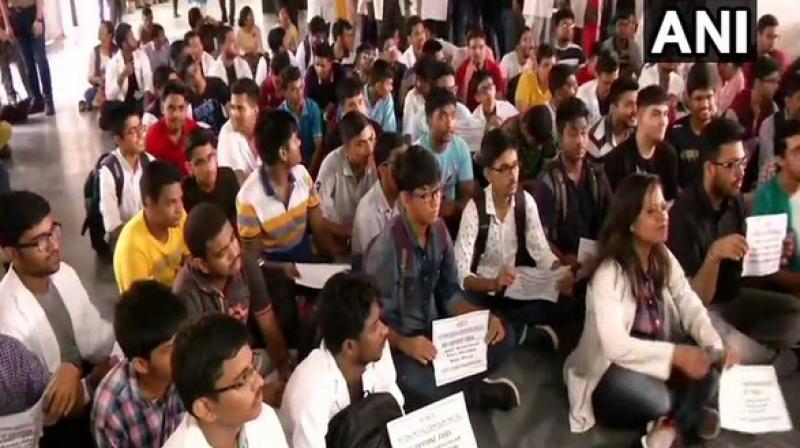 'One of the protesting resident doctors said, 'Our strike is against some provisions of NMC Bill.' (Photo: ANI)

Resident Doctors Association (RDA) is observing a one-day strike across the nation on Thursday against provisions of National Medical Commission Bill.

One of the protesting resident doctors told ANI, "Our strike is against some provisions of NMC Bill. Resident doctors have withdrawn from services. Faculty and consultants are providing services. If the government doesn't listen to us then it would be counted as one of the black days in the history of the medical fraternity."

A large number of resident doctors were seated in the waiting area of AIIMS, Delhi, holding placards terming the Bill "anti-poor" and "anti-national. "It will cripple the health system," read a banner.

RDA has stated that this proposed Bill will increase corruption and decrease autonomy in medicine.

Medical students in Kerala's Trivandrum also demonstrated outside Raj Bhavan against provisions of the Bill. Holding banners stating "No to NMC", they also burned pieces of paper with NMC written on them.

On July 29, the Lok Sabha had passed the NMC Bill which seeks to create National Medical Commission in place of Medical Council of India (MCI) with Health Minister Harsh Vardhan terming it as an "anti-vested interests Bill" which will be remembered as one of the greatest reforms brought by the Modi government.

It provides for the repeal of the Indian Medical Council Act 1956.

The Bill provides that the common final year MBBS exam be known as National Exit Test (NEXT) which would serve as a licentiate exam for entrance to post-graduate medical courses and as a screening test for foreign medical graduates.