Clearance for the redevelopment of the building was given long back; it was supposed to be vacated and demolished. 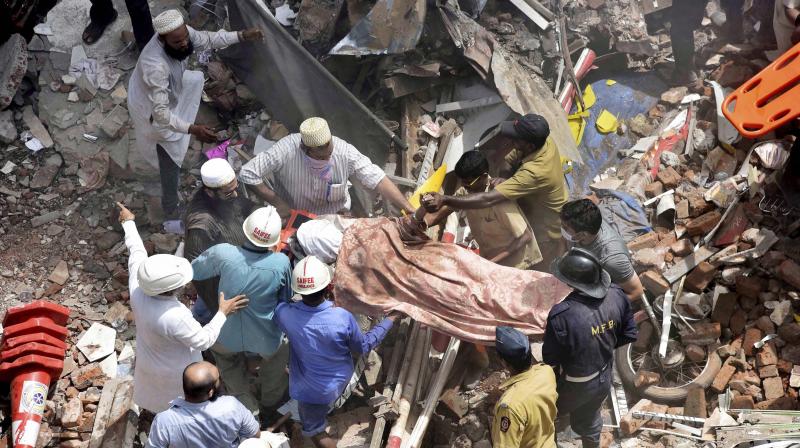 The Chief Minister has directed the BMC Commissioner to focus on immediate medical assistance to the injured persons. (Photo: DC/Rajesh Jadhav)

Mumbai: Fire brigade officials on Friday said that 34 people have died in the collapse of a 117-year-old building with residences, godowns and a play school in the congested Bhendi Bazaar in south Mumbai with more deaths reported overnight.

The dead include 24 men, nine women and a 20-day-old child, police said. The search operation by personnel of fire brigade, NDRF and the Mumbai civic body was on a war footing as they pulled out 10 bodies from under the rubble since Thursday night.

They added that another nine people were rescued with injuries from the debris and admitted to the JJ Hospital. Six officials of the fire department and one from the NDRF also suffered injuries in the operation.

Clearance for the redevelopment of the building was given long back. It was supposed to be vacated and demolished.

Meanwhile, Maharashtra Chief Minister Devendra Fadnavis announced an ex-gratia of Rs 5 lakh for the kin of those who died in Bhendi Bazaar building collapse.

Taking stock of the situation the Chief Minister also assured that action would be taken in case of any negligence in the incident.

The chief minister visited the accident spot and also ordered a detailed enquiry into the matter.

"Action will be taken in case of any negligence. I am personally monitoring the situation," Fadnavis told the media in Mumbai.

The injured people have been admitted to the JJ hospital for medical treatment.