Honeypreet Insan has been charged with sedition for allegedly plotting escape of self-styled godman. 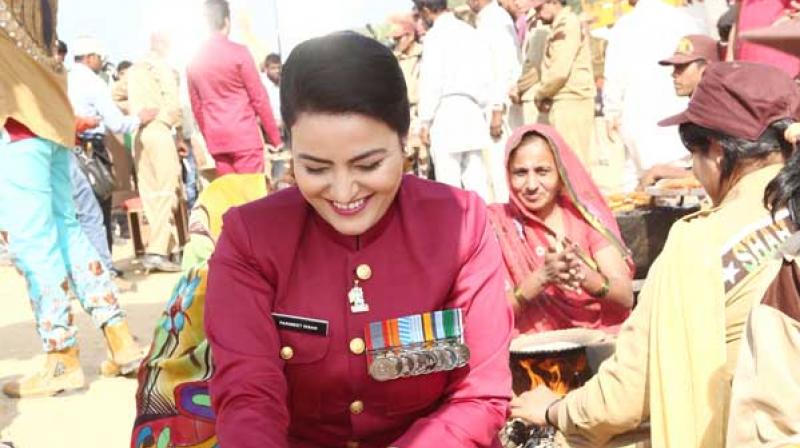 Honeypreet Insan has been charged with sedition for allegedly plotting escape of self-styled godman. (Photo: honeypreetinsan.me)

According to a report in NDTV, the police have issued an alert for Insan at the airports and other exit points. Insan has been charged with sedition for allegedly planning to free Singh after he was declared guilty by a special Central Bureau of Investigation (CBI) court in Panchkula on August 25.

The Haryana police managed to whisk away Dera Sacha Sauda chief Singh from the court to Rohtak jail only after foiling an alleged bid by his security men to free him.

Inspector General of Police KK Rao said that as soon as the self-styled godman was convicted, he demanded a 'red bag' that he had brought along from Sirsa.

"The Dera chief demanded the bag, saying his clothes were in it. It was actually a signal for his men to spread the news of his conviction among supporters so that they could resort to causing disturbance," Rao said.

He said that as the bag was taken out of the vehicle, sounds of tear gas shells being lobbed about 2-3 km from the site were heard.

"It was then that we understood that there was some meaning behind the signal," the police official claimed.

And what made senior police officials even more suspicious was that Ram Rahim Singh and his adopted daughter kept standing in the Panchkula court complex corridor for a long time even when they were not supposed to do so, he said.

"They were trying to gain time before sitting in the vehicle so that their men could spread the message that he was moving from the court. They were told that you cannot stand here. The mob was about 2-3 km and could have moved closer. We never wanted violence in Sector 1 as casualties could have been more," the senior police official said.

The police decided to make him sit in the vehicle of DCP (Crime) Sumit Kumar instead of the vehicle he had arrived in, Rao said.

When we were making him sit in the vehicle, commandos, deployed with him for several years, gheraoed the Dera chief, Rao alleged.

"Thereafter, DCP (Crime) Kumar and his team scuffled with them. His commandos were even thrashed," he said. We took good care that no firing takes place, Rao said adding that even the commandos assigned to protect the godman were also armed.

Another threat that the policemen sensed was from the around 70-80 vehicles, part of the Dera chief's cavalcade, which were parked next to a nearby theatre, he claimed.

"We did not want to use the same route as 70 vehicles were standing. People in those vehicles might have been carrying weapons," he said.

Our priority was to first take Ram Rahim to the chopper site, he said. It was a challenge to make him sit in the police vehicle, Rao said, adding that a decision was taken to change the route.

"I asked an Army man to allow the police vehicles (including the one carrying Dera chief) to move through the cantonment area. Had their people come to know about our movement, they would have reached there and firing could have taken place," the Inspector General said.

As we were about to proceed towards the cantonment area, the Dera chief's private commandos forcibly clung to the police vehicle, he said. They were again thrashed and taken into custody, Rao added.

"The Baba's men were clueless for over half an hour as to where he had been taken," he said.

"We came to know about the escape plan when the red bag was demanded. Secondly, they were trying to gain time. Thirdly why men in 70 vehicles were standing," he claimed.

Ram Rahim was then taken to Sunaria jail in Rohtak via a chopper, the police official said.