Leuthard said she was very happy over the outcome of her talks and that there was scope for further expansion of trade ties. 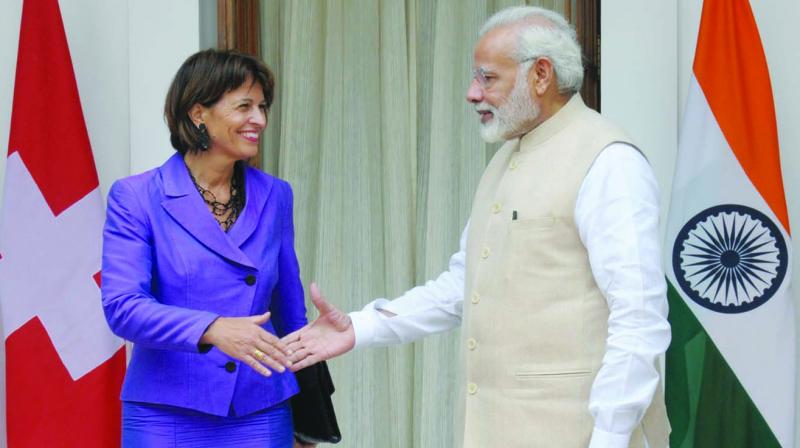 Describing their talks as productive, Mr Modi said transparency in financial transactions is a major global challenge and that cooperation between India and Switzerland over it will continue further.

“Be it black money, dirty money, hawala transaction or money related to arms and drugs, our cooperation with Switzerland continues to deal with the global curse,” the Prime Minister said. The Swiss President exuded confidence that a law on ensuring automatic exchange of information relating to tax would be cleared by the Swiss Parliament by end of the year and her country will be able to exchange first set of information with India by 2019.

“We hope by end of this year, this (law on automatic exchange of information) will be passed,” she said.

The issue of black money has been a matter of major debate in India and Switzerland has been long perceived as one of the safest havens for the illicit wealth allegedly stashed abroad by some Indians.

Leuthard said her country follows all international rules on financial transaction to ensure transparency, adding “we have probably today one of the strongest laws on money laundering”.

The two sides also deliberated on further boosting ties in key sectors like trade and investment, infrastructure and energy while agreeing on the need to continue dialogue on a bilateral investment pact.

Giving broad contours of their discussions, Modi said the extensive and productive talks covered bilateral, regional and global issues and that Leuthard’s visit further strengthened the bilateral ties. The two sides also inked two pacts for cooperation in the railway sector. These are—an MoU between Konkan Railway Corporation Limited (KRCL) and the Swiss Federal Institute of Technology, Zurich, and an MoU between Ministry of Railways, India and Federal Department of the Environment, Transport, Energy and Communications of the Swiss Federation on Technical Cooperation in Rail Sector.

Modi said there was deliberations on challenges of climate change and both sides agreed to work for implementing the Paris climate accord focusing on the principle of common but differentiated responsibilities.

On trade cooperation, he said FDI has been a major pillar of economic ties and India particularly welcomes Swiss investors. “We agreed on the need to continue dialogue on bilateral investment pact. Swiss companies have avenues to be part of India’s growth and development,” he said.

The prime minister said there was deliberation on the trade and economic partnership agreement between India and European Free Trade Association and both the countries expressed resolve to conclude the pact.

On Switzerland support to India’s NSG bid, he said, “India will be benefited from membership of the Nuclear Suppliers Group to meet its growing demand of clean energy.”

Leuthard said she was very happy over the outcome of her talks and that there was scope for further expansion of trade ties. In this regard, she underlined the need for having an investment protection pact. She said Switzerland can offer India “infrastructure of tomorrow” in many areas including in railways. “Negotiations for it are on. We hope it is important for our investment,” she said.