The petitioner said this is her first movie and she is a student pursuing her B. Com from Vimala College at Trichur District Kerala. 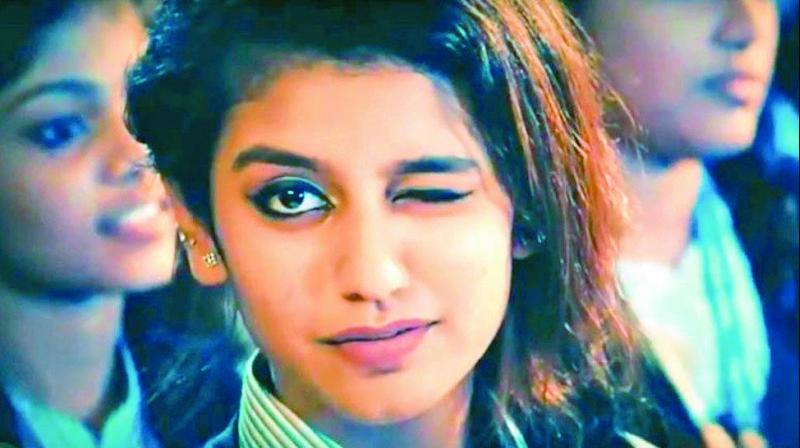 New Delhi: The Supreme Court on Friday quashed the criminal proceedings pending in Maharashtra and Telangana against Kerala actress Priya Prakash Varrier for the Malayalam song in the move “Oru Adaar Love”. The case was filed against her on the ground that it hurts the religious sentiments of Muslims.

A three judge Bench of Chief Justice Dipak Misra and Justices A.M. Kanwilkar and D.Y. Chandrachud, after hearing counsel Harris Beeran, had in February this year stayed the proceedings and directed that no other FIR or complaint under section 200 of the Cr.P. C. be entertained against the petitioners.

In quashing the case, the bench observed that the song in question is a part of folklore, has been in public domain since 1978 and sung in various parts of Kerala. It noted that the grievance that the song allegedly hurts the sentiments of a religious community arises on account of its depiction in the film, where the actress is shown winking, an act, which is not conducive to the Islamic beliefs.

The bench pointed out that the song was released in February and has been available on YouTube and other media and accordingly. The petitioners could not be said to have intended to insult any class or hurt public order so as to invite the wrath of section 295-A of the IPC.

The Bench quoting an earlier judgment said IPC section 295A only punishes the “aggravated form of insult to religion when it is perpetrated with the deliberate and malicious intention of outraging the religious feelings of that class”.

The bench noted that the film has not been completed and the CBFC is yet to judge the context of the song in according the certification. , the bench said “We have been informed that the wink is blasphemous, however, no other allegation has been made...The petitioners cannot be made liable under section 295A, IPC for a song in a movie which is yet to be released”

The Bench also referred to the order passed in 2017 in Padmaavat film release case, where the court had declined to “prejudge” the content of the film or interfere in its release even as the application for its certification was pending the consideration of the CBFC, the statutory authority.

The Bench said the honesty and intellectuality of writers, lyricists, filmmakers and other artists has to be accepted by the audience unless it is prohibited in law. The petitioner said this is her first movie and she is a student pursuing her B. Com from Vimala College at Trichur District Kerala. On February 9, the producers of the movie Oru Addar Lover released a promotional video of a song “Manikya Malaraya Poovi” from the movie on Youtube. The Movie is an adolescent Love Story.

The song “Manikya Malaraya Poovi” has been misunderstood by people outside Kerala (Non-Malayalam speakers), as it is being wrongly translated/ interpreted and taken out of context, which is leading to the registration of multiple criminal cases against the petitioners in Maharashtra and Telangana.

The song describes and praises the love between the Prophet Mohamed and his first wife Khadeeja. The translation of the lyrics of the song are as follows: “She bloomed like a precious flower in the sacred land of Mecca, great Khadeeja Beevi Was roaming in the sacred land; The lady roaming; She called for the respected lord, prophet And send him for trade; She saw him and Coveted him in the heart of hearts; She came back after trade And she sought her hand Sought her hand." She prayed that the FIR and complaints should be quashed as no ingredients have been made out against her.Eom.