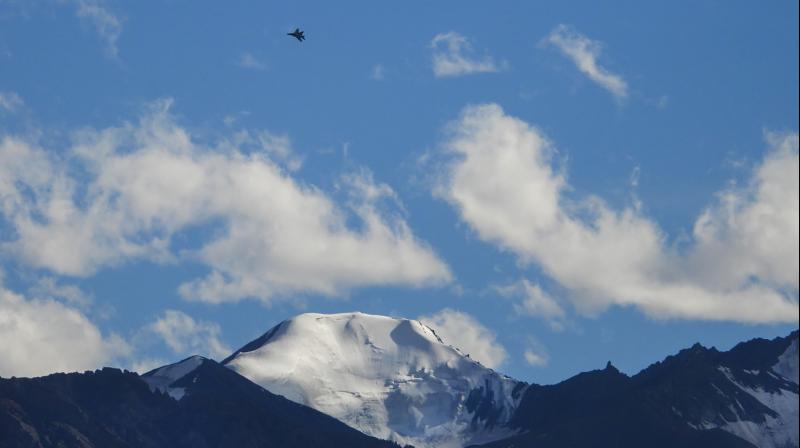 An Indian Air Force fighter jet carries out a sortie over Ladakh where India and China have been engaged in a standoff for four months. India claimed on Monday that it pre-empted a move by the Chinese army to occupy Indian territory at a new point in the region. (AP file photo)

New Delhi: The Indian army said on Monday that it "pre-empted" an attempt by Chinese troops to transgress and grab land on the southern banks of Pangong Tso on the intervening night of 29-30 August 2020.

This was an attempt by the Chinese to open a new front in the Ladakh sector. India and China were until now in a standoff  in the "Finger area" on the northern banks of the Pangong Tso. But now they are also looking to infiltrate in the Chushul sector.

In a statement issued on Monday, the Indian Army said PLA troops carried out provocative military movements to change the status quo on the night of 29-30 August 2020. “Indian troops pre-empted this PLA activity on the Southern Bank of Pangong Tso Lake, undertook measures to strengthen our positions and thwart Chinese intentions to unilaterally change facts on the ground,” it said.

The statement added that the Indian Army is committed to maintaining peace and tranquility through dialogue, but is also equally determined to protect India's territorial integrity.

A brigade commander level flag meeting was held at Chushul to resolve the issue.

As per initial reports, the Army had received information that the Chinese started building up forces to occupy Indian territory on the southern banks of Pangong Tso. The Indian Army physically occupied the area as soon as the PLA tried its transgression. There was no physical clash between the troops.

The Indian Army's “pre-emptive” move comes days after chief of defence staff (CDS) Gen. Bipin Rawat warned that India has "military options" to deal with Chinese transgression in Ladakh if talks between the countries at the military and diplomatic level don't yield any result.

The Chinese army’s Western Theater Command accused India of crossing the Line of Actual Control and deliberately launching provocations. “China strongly opposes the acts and urges India to immediately withdraw the troops that have illegally crossed the LAC,” it said.

It said that Chinese troops are taking necessary measures in response to Indian troops provocations and will closely follow the situation and resolutely safeguard national sovereignty, peace and stability at the border area.

The military standoff between India and China in Ladakh will complete four months this week. The two armies are involved in a standoff in Pangong Tso, Hot Springs area and Despang-DBO sector in Ladakh.

A series of military and diplomatic talks between India and China have failed to persuade China to disengage. Instead China has used this time of negotiations with India to bring in more forces at the LAC, position heavy weaponry, construct helipads, build air defence systems, and deploy missiles at new positions.

It has even deployed its most advanced fighter jets J-20 at Hotan airbase which is 200 miles from Ladakh and they are carrying out sorties directly threatening India. China is also reportedly laying down optic fibre at LAC to further consolidate its transgressions.

The Chinese attempt to occupy new areas comes despite a series of engagements at the diplomatic and military level to disengage and deescalate the situation in the Ladakh sector.  The latest confrontation means that the situation is unlikely to deescalate any time soon and will continue in the winter too. India has already started preparations for winter and is stocking up supplies required for thousands of new troops deployed in the area.

Special Frontier Force personnel were used  by Indian Army to occupy these strategic peaks in the Southern banks of Pangong Tso. This took the Chinese army by surprise. The occupation of these heights has shown Indian resolve to take the fight to the Chinese side.