Swaraj in her appeal also urged the family of Geeta to come forward and accept their daughter. 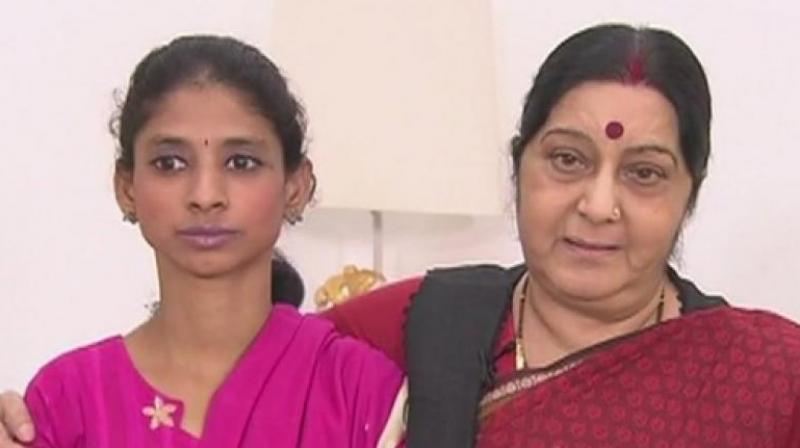 New Delhi: External Affairs Minister (EAM) Sushma Swaraj on Sunday, in a heartfelt message, appealed to the people of the nation to help Geeta, the deaf and mute girl brought back from Pakistan in 2015, to find her parents.

Swaraj, through a video message, announced that whoever will help Geeta in finding her parents will be rewarded with Rs 1 lakh.

"If anybody knows anything about the family of the girl, then please let us know. Whoever will give us information about her parents, we will give them reward of Rs one lakh," Swaraj said.

Swaraj in her appeal also urged the family of Geeta to come forward and accept their daughter.

"I want to appeal the family of Geeta to come forward and accept their daughter. I promise them that she will never be a burden for them. We will take her complete responsibility right from her education and marriage expenses. But please come forward, their daughter wants to meet them," she said in the message, while Geeta was standing next to her.

Swaraj requested the media to run the concerned news for at least 8-10 days. She even made a special appeal to the Chief Minister's of Bihar and Jharkhand to make sure that the message reaches the remote areas.

Geeta, the 22-years-old girl who was brought back to India from Pakistan back in 2015, still waits to meet her family.

Stuck in Pakistan for 14 years, the news came to light after the release of Salman Khan starrer Bajrangi Bhaijaan.

Founder of Edhi Foundation Bilquis Edhi, a social welfare organisation in Pakistan who was taking care of the girl, named her Geeta. She is also called Guddi.

Geeta was reportedly just 7 or 8 years old when she was found sitting alone on the Samjhauta Express by the Pakistan Rangers at the Lahore railway station, later she was adopted by Edhi.

Despite several attempts the Indian officials have not been able to find her family.

Number of couples visited the institute in past two years to claim her to be their daughter, but she did not recognise any of them.

Geeta is currently staying at an institute for speech and hearing impaired in Indore.