After receiving the assurance from the state government, the family cremated the body of Vivek Tiwari on Sunday morning. 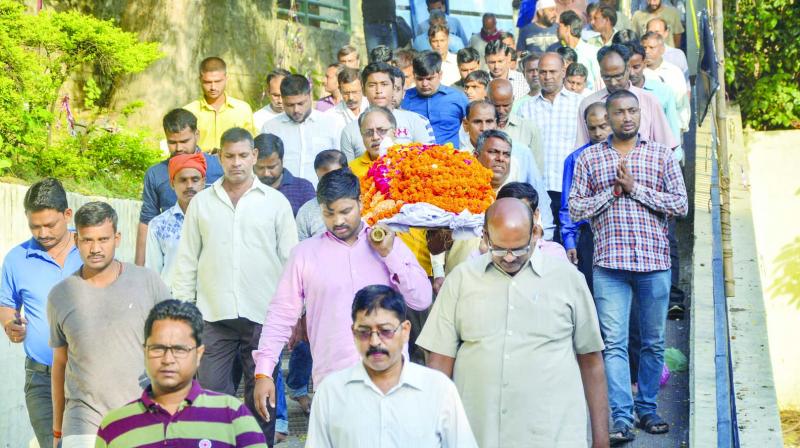 People attend the funeral procession of Apple executive Vivek Tiwari, who was shot dead by a police constable, in Lucknow. (Photo: PTI)

Lucknow: The Yogi Adityanath government has agreed to give a compensation of Rs 25 lakhs and a job to the wife of the Apple executive who was shot dead by two policemen in Lucknow on Saturday morning.

After receiving the assurance from the state government, the family cremated the body of Vivek Tiwari on Sunday morning.

Even as the Opposition parties demanded the resignation of chief minister Yogi Adityanath and asked him to take moral responsibility for the incident, several Opposition leaders met the family of the deceased  on Sunday.

UPCC president Raj Babbar was among the first to reach the New Hyderabad residence of the deceased.

“This is the constituency of Union home minister Rajnath Singh and yet the state government is taking the matter so lightly. Why the medical examination of the two accused constables was not done and why was the colleague of Vivek Tiwari who was in the car at the time of the incident, detained by the police for several hours?  Why did the police not inform the family after the incident? Who is responsible for these lapses?” he asked.

“Samajwadi Party president Akhilesh Yadav, who is presently in Madhya Pradesh, has termed the killing a result of the prevailing ‘jungle raj’ and demanded the resignation of chief minister Yogi,” Samajwadi Party spokesperson Rajendra Chaudhary said. AAP MP Sanjay Singh visited the residence of Vivek Tiwari and said that the incident was an example of the brutality of the UP police force that took pride in killing innocent people.

UP minister Dharampal Singh, on the other hand, came up with a shocker when he tried to blame the victim by saying the state government made no mistake in encounters.

“Bullets are hitting only those who are criminals. ‘Gundaraj’ during Samajwadi Party’s regime is making noise, everything else is normal. We will not compromise when it comes to criminals,” the minister told reporters.

Meanwhile, Kalpana Tiwari, wife of the deceased , gave another FIR on Sunday, naming the accused cops. The FIR registered on Saturday  did not include the names of the cops but said ‘unnamed police wale’.

It may be recalled that Vivek Tiwari, 38, was shot dead by cops on patrol duty when he refused to stop his car in the early  hours of Saturday. The cops claimed that they had fired in self defence since Tiwari, area manager for Apple tried to mow them down.