'We are prepared for any eventuality and will carry out any mission as directed by the government,' Bhadauria said. 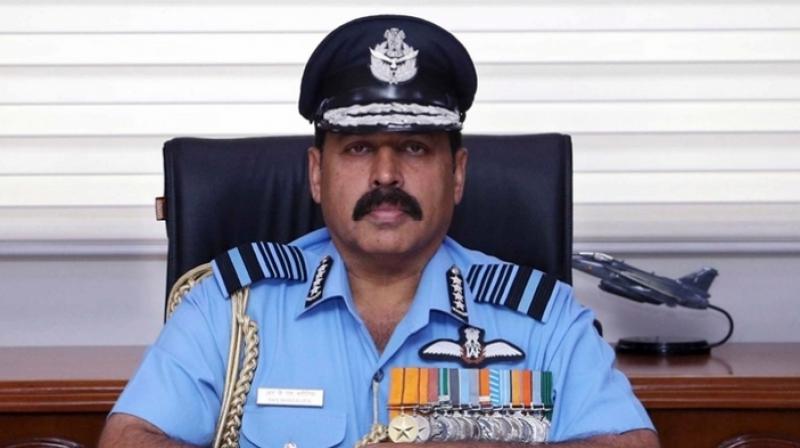 'We are monitoring the developments and I reassure the country that we are ready to deal with any situation where our services are required by the nation,' the Air Chief Marshal said. (Photo: ANI)

New Delhi: The Indian Air Force is monitoring the developments along the western front and is prepared to carry out a Balakot-type strike, if directed by the government, Air Chief Marshal R K S Bhadauria said after taking charge of the IAF on Monday.

Bhadauria, who has around 4,250 hours of flying experience on 26 types of aircraft and led commercial negotiations for procurement of the 36 Rafale jets, also said the induction of these French combat aircraft will give the IAF enhanced aerial prowess over the country's "adversaries".

"We are monitoring the developments and I reassure the country that we are ready to deal with any situation where our services are required by the nation," the Air Chief Marshal told PTI.

"We are prepared for any eventuality and will carry out any mission as directed by the government," the 60-year-old air chief said when asked whether IAF was prepared to carry out another strike across the border in view of Army Chief Bipin Rawat's recent comments that the Balakot terror camp has been reactivated.

The IAF had carried out a precision strike, bombing a major Jaish-e-Mohammad terrorist training camp deep inside Pakistan's Balakot on February 26, which was seen as a paradigm shift in India's approach in containing cross border terrorism.

The IAF Chief also asserted that his force was ready for a similar mission. Without elaborating, Bhadauria said the IAF was in the process of inducting significant combat capability which will bolster its overall operational potential.

"We are always vigilant and are fully prepared to deal with any contingency," he said. On the procurement of 36 Rafale aircraft, he said,"Rafale aircraft will give us enhanced capabilities over our adversaries. It will significantly boost combat prowess of the IAF."

The first of the 36 Rafale jets will be received by Defence Minister Rajnath Singh at a ceremony in Paris on October 8.

He also added that the IAF "is in the process of inducting significant combat capability which will bolster our overall operational potential." With the force grappling with rising number of accidents involving its aircraft, the IAF chief said ensuring safety of aircraft and other war fighting equipment will be another focus area for him.

Earlier, in a brief message to the AIF personnel, he said, "the focus of the IAF shall be to rapidly operationalise newly inducted platforms and equipment as well as to ensure earliest and complete integration of these capabilities in IAF's operational plans." After taking charge as 26th IAF chief, Bhadauria also called on the Defence Minister.

"There shall be impetus on modernisation through acquisition of crucial technologies and critical capabilities with increased reliance on indigenous design and development. We shall pro-actively promote indigenisation for sustenance of all existing fleets and equipment," the IAF chief added.

He was commissioned in to the fighter stream of the Indian Air Force in June 1980, and has held various command, staff and instructional positions An alumnus of the National Defence Academy, Bhadauria was commissioned into the fighter stream of the IAF in June 1980 and won the coveted 'Sword of Honour' for standing first in the overall order of merit.

During his nearly four-decade-long career, Bhadauria commanded a Jaguar squadron and a premier air force station. He devised a method for carrying bombing from the Jaguar aircraft using the Global Positioning System (GPS).

This was especially relevant for the bombing role of Jaguar aircraft in Operation Safed Sagar in 1999.

Bhadauria is one of the few Air Force pilots to fly Rafale jet. In July, during Exercise Garuda between the air forces of India and France, Bhadauria had flown the Rafale aircraft.