When Bapu stayed in Coonoor for 8 days

Of course, it is a memorable one as he stayed at a house in Coonoor near here for eight days at a stretch then. 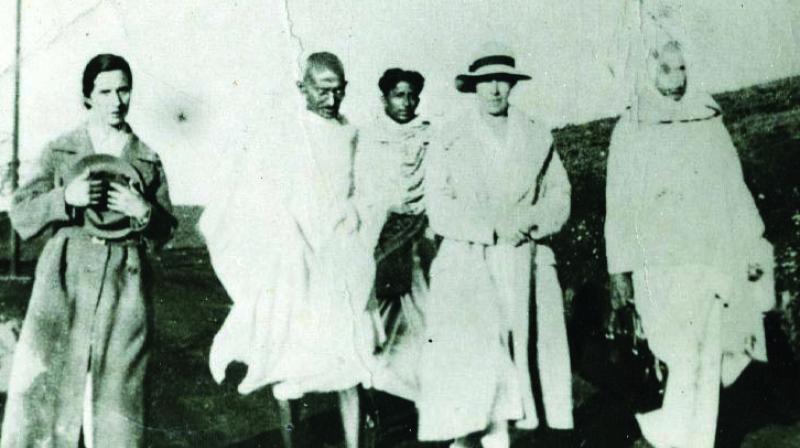 Photo shows Mahatma Gandhi taking a stroll along Ettines Road in Ooty on his way to municipal maidan on February, 1934.

Ooty: As the country gears up to celebrate Mahatma Gandhi’s 150th birth anniversary , the hills in Ooty have their share of memories on Mahatma’s singular visit to the Nilgiris way back in 1934 that turned out be historic.  Of course, it is a memorable one as he stayed at a house in Coonoor near here for eight days at a stretch then.

Narrating Mahatma’s visit to the Nilgiris, according to the documents available on it, Ooty veteran Mr. Dharmalingam Venu-gopal, director of Nilgiris Documentation Centre, said that Bapu arrived at Coonoor  on January 29,1934 on his southern tour against untouchability  and stayed as a guest at Nageswara Rao’s “Ramashram” on Mount Pleasant in Coonoor.

“On the day of arrival, Gandhi only appeared for a minute in the evening to satisfy some villagers who had been waiting to greet him. The next two days he did not move out.  On February 1, a deputation on behalf of Adi-Dravida Jansabha, Coo-noor met Gandhiji. His first public meeting in Nilgiris was on February 2 at Kotagiri, which was attended by about 6,000 people, mostly Badagas. Noting that Badagas were “neither Harijans nor Harijan oppressors” Gandhi appealed to the gathering to give up the habit of consuming liquor,” he said.

“On the next day, Gandhi visited a Harijan Cheri at Ottupatrai in Coonoor and then visited Thandakaran Cheri in Coonoor.    On February 4, Gandhi drove to Ooty at address a public meeting.  On that day he also visited the local Om Prakash Mutt and visited Dakshi-namoorthi Ashram. On February 5, it turned out be a day of silence to him.  On 6th February, Gandhi and his party left Coonoor by road,” Mr. Venugopal explained.

With the decades passing by, now it is interesting to note that “Ramashram” on Mount Pleasant in Coonoor, where Gandhiji stayed for eight days, is now known as ‘Leela Garden’ and popularly known as Gandhi Bungalow.  Mr. Erric, a tenant in that bungalow now said that the room, which was modified over time, in the corner of the bungalow was the one where Mahatma stayed.  Meanwhile, C. Prakash-chand, a longtime resident at  Mount Pleasant in Coonoor said that what he heard from his late grandfather Mr. Balchand  that Gandhi used to move to the open  terrace of the room he stayed in Coonoor and addressed  the gathering from there couple of times.