India   All India  01 Oct 2020  Rahul Gandhi, Priyanka Gandhi arrested by UP Police on their way to Hathras
India, All India

Rahul Gandhi, Priyanka Gandhi arrested by UP Police on their way to Hathras

Rahul was allegedly also shoved and pushed to the ground by police personnel present at the site. 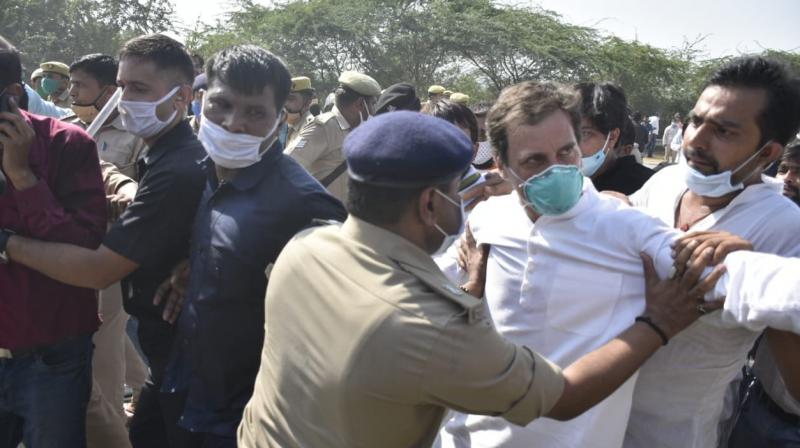 Rahul Gandhi being manhandled by the UP Police. (PTI)

Congress leaders Rahul Gandhi and Priyanka Gandhi Vadra were on Thursday arrested by police while they were proceeding on foot towards Hathras to meet the family of the Dalit gang-rape victim after their convoy was stopped in Greater Noida by the UP Police.

Rahul and other leaders were arrested under Section 188 of the Indian Penal Code, which provides punishment for disobedience to an order duly promulgated by a public servant.

Shri @RahulGandhi, Smt @priyankagandhi & senior Congress leaders have been arrested by the UP police.#JusticeForIndiasDaughters pic.twitter.com/mZ3hMj84Z9

Along with the Gandhi siblings, Adhir Ranjan Chowdhury, KC Venugopal and Randeep Surjewala were taken to Buddh International Circuit guest house in Gautam Buddh Nagar by the police.

Rahul was allegedly also shoved and pushed to the ground by police personnel present at the site. Pictures of him falling down in the melee were shared by the Congress party across social media.

The Congress convoy was stopped near Pari Chowk, prompting party workers and senior leaders to proceed on foot to Hathras, which is 150 km away from here.

A large number of Congress workers from Uttar Pradesh accompanied the two leaders on their march towards Hathras. They also raised slogans against the UP government.

Talking to reporters while walking on the Yamuna Expressway towards Hathras, Priyanka Gandhi said Uttar Pradesh Chief Minister Yogi Adityanath should take responsibility for the alleged gangrape of a 19-year-old Dalit woman in the district and strict action should be taken against the perpetrators of the crime.

The victim died in a Delhi hospital on Tuesday.

"Since our cars have been stopped, we will walk down to Hathras as we want to meet the victim's family. We want to express our condolences to the family," Priyanka Gandhi said.

"He (Adityanath) would have to do something for women's safety. We will continue to fight till the time he does something. The women in the entire state will fight as they realise that they are not safe and secure. Everyday such incidents are happening. Eleven rape cases are registered in Uttar Pradesh everyday," she said.

The Congress general secretary recalled that around the same time last year, her party was protesting for the Unnao rape victim.

"The incident was a big injustice. What the state government did after that was a bigger injustice," she said, adding the Adityanath must ensure that atrocities against women are stopped.

Ahead of the visit by Congress leaders, the Hathras district magistrate imposed prohibitory orders under section 144 of the Code of Criminal Procedure (CrPC) and ordered sealing of the district borders to maintain peace.

A 19-year-old Dalit woman was allegedly raped by four upper-caste men in Hathras on September 14 and referred to the Safdarjung hospital in Delhi on Monday with spinal cord injuries, paralysis and cuts in her tongue. She died around 3 am on Tuesday.

Her brutal death and subsequent cremation in the dead of the night in Hathras allegedly under police pressure on Tuesday triggered massive outrage across the country over the law and order situation in UP and over women safety in general.

Earlier, a Congress functionary said the Noida-Greater Noida expressway was barricaded by the police and scores of personnel deployed on the road shortly after the Congress leaders and workers entered UP's jurisdiction from Delhi.

Nearly a hundred vehicles were in the convoy that was stopped from proceeding, the functionary said

Scores of Congress workers had also staged a protest at the Delhi-Noida border, raising slogans against the BJP-led governments in the Centre and in Uttar Pradesh over the gang-rape and death of the Dalit woman.

The Gandhis were joined by Surjewala, PL Punia, and UP unit chief Ajay Kumar Lallu.

When asked about the prohibitory orders placed in Hathras ahead of the Congress leaders' visit, Surjewala told reporters at the DND, Instead of stopping criminals, the Yogi Adityanath government is working on stopping Rahul and Priyanka and that is the question.

He also questioned the cremation of the woman in the dead of the night, saying it was against the Hindu traditions and was done without her family's involvement.