India   All India  01 Nov 2017  It’s peevish to blame every modern rail project as a waste of money
India, All India 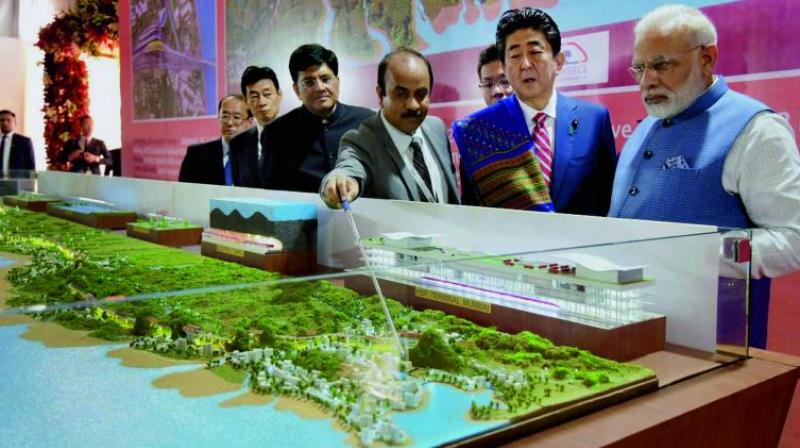 If some look at stampede on a foot overbridge which occurred in the Mumbai suburban rail network on September 29, 2017 as a standalone incident, and has nothing to do with the superdense congestion that Indian rail network faces and huge scarcity for rail passenger services at every point, they are absolutely mistaken. Stampede in a Mumbai suburban station is just a symptom of the overstretched rail network and congestion in every sphere of rail travel, which has been a more than a four-decade problem.

Even the regular derailments are a just a symptom of how India’s rail network is abused to the level where there is no time given for the maintenance staff to upkeep the railway infrastructure. So instead of looking at accidents like stampede, derailments or any accident that happens due to congestion, as standalone incidents, it is better to look at the larger problem of rail transport scarcity and how to address it.

Passengers seek rail services for three distinct travel purposes. The first one is a local urban travel, where people travel within 30 km to 50 km. With suburbs of major cities expanding, merging into distant cities and towns, India witnessed a new kind of travel called regional travel, where passengers travel about 50 km to 200 km. The third category is the long-distance inter-city travel, where the travel exceeds 200 km. Although, India has been facing the huge scarcity of rail transport on all the three travel fronts, with the construction of almost two dozen Metro rail projects, the huge scarcity of rail transport facility in local urban travel is getting addressed.

For instance, road transport was the only choice for Delhiites till Metro was operational and now with more than 200 km of Metro rail network, Metro contributes to about 20 per cent of the local travel of Delhiites. When Delhi Metro will expand to 450 km, the share of rail mode in local travel in Delhi will increase to 40 per cent. Even in Mumbai, 11 km of Metro line is in operation and Mumbai Metropolitan Region Development Authority is developing 200 km of Metro rail. This is in addition to the expansion of suburban rail services in Mumbai carried out by Indian Railways.

However, the huge scarcity in regional travel and long-distance travel are yet to be addressed. To satisfy the pent-up demand of regional travel by rail, India realised the need to develop its regional rail network, which will connect cities with its suburban towns. To begin with, India is developing its first Regional Rapid Transit System (RRTS) in the National Capital Region, which will operate at a maximum speed of 180 kmph and an average speed of 90 kmph. Delhi-Sonipat-Panipat (111 km in one hour 14 minutes) and Delhi-Gurgaon-Rewari-Alwar (180 km in one hour 57 minutes) and Delhi-Ghaziabad-Meerut (90 km in one hour two minutes) will cost Rs 16,500 crores, Rs 37,000 crores and Rs 21,902 crores respectively. Every other region that is emerging from the expansion of metropolitan areas like Mumbai, Bengaluru, Chennai, Kolkata, etc, also may follow RRTS of NCR in providing faster rail connectivity to its passengers in their respective regions.

The huge scarcity of rail transport in long-distance travel may be best addressed with developing high-speed rail (HSR) corridors on important stretches. Ahmedabad-Mumbai via Vadodara and Surat HSR is the first project in this direction. There are many other corridors such as Chennai-Bengaluru-Coimbatore, Delhi-Mumbai, Delhi-Kolkata, Delhi-Chennai, Chennai-Mumbai, Chennai-Vijayawada-Hyderabad and Delhi-Chandigarh-Amritsar that have been identified for HSR development and some of the pre-feasibility and feasibility studies have been completed.

No one denies the need to address the various issues that plague the existing conventional rail system like creating additional capacity, safety, hygiene, replacing dilapidated coaches with new safe coaches, mandatory passenger facilities in the stations like foot overbridges and escalators in the existing conventional rail system from time to time. But even after addressing these issues, the conventional rail systems are too little for the pent-up demand for rail transport in urban local, regional and long-distance travel. India’s failure to develop state of the art rail systems in the last four decades has created huge scarcity for rail transport infrastructure. We can develop as many Metro, mono, regional rail and HSR projects as possible, but the permanent solution for addressing the huge rail transport scarcity that India faces now has to be addressed. Each project will remove the congestion in the rail transport at least to some extent. In this backdrop, attacking these projects as waste of money and misplaced priorities on the pretext of one or other unfortunate incident is nothing but peevishness.

The writer is an independent consultant and may be contacted at ramakrishnan@iima.ac.in