Slowly, people were getting to know about kind of difficulties journalists faced to bring news to them, Rajyavardhan Singh Rathore added. 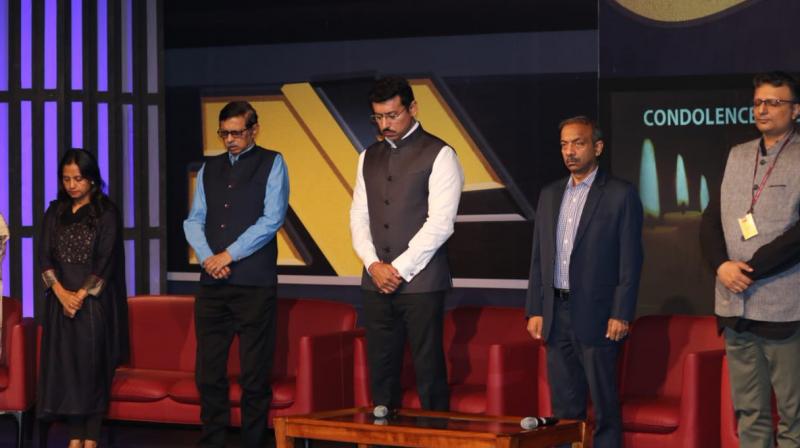 He was speaking at a condolence meeting for Sahu organised by Prasar Bharti in New Delhi.

"There are many media houses, but Doordarshan and DD News are national broadcasters. Just like Army jawans are involved in serving the country, we are also involved in serving the nation. We have to cover a lot of difficult domains through our camera or our pen. You have the responsibility of disseminating news to the entire country," Rathore said.

Slowly, people were getting to know about the kind of difficulties journalists faced to bring news to them, he added.

Achyuta Nanda Sahu - a hard worker, a passionate employee and a man so committed to his work and his country that he laid down his life in the course of his duty.

We at @MIB_India and Prasar Bharti grieve a terrible loss today. We stand with his family in this difficult time. pic.twitter.com/wUmSGqbZRS

"He (Sahu) lost his life at a place from where the country's enemies wished to give a message that they wanted to stop the country from progressing. His family should not feel that they have been left alone," the Information and Broadcasting minister said.

"I know of the courage and bravery of our colleagues in DD news when they are out on various assignments. As a person who has been on the field, we journalists are living on the edge. Whether it was Punjab in the 1980s and later Kashmir or going out on our own assignments, it is always a matter of touch and go. Anything can happen. It requires a great amount of guts and professionalism to be on the spot and go and do that thing," he said.

Prakash saluted the "bravery and commitment" of Sahu and his colleagues, who had gone to cover a story about a village which had not voted in the last 20 years.

"Not only conflict zones, I have seen tsunamis, earthquakes. In Gujarat, many years ago, it was very risky to go and cover stories but reporters go out and want to get the best story out. The courage and professional commitment of our colleagues in Doordarshan are as good as you can get anywhere in the world," he said.

Doordarshan staffer Mormukut Sharma, 35, who was accompanying Sahu in Chhattisgarh, said he felt they would also not survive the Naxal attack.

"I was dehydrated during the attack. I had managed to dig a hole with my hands so that I could hide there. If I raised my head, bullets would come flying and while lying there, I was being bitten by red ants," he recalled.

Sharma, a lighting assistant with DD News, and journalist Dhiraj Kumar survived the gunfire after a Naxal ambush on a police convoy in Chhattisgarh's Dantewada district Tuesday. But Sahu, who was their colleague, tragically died in the early minutes of the ambush when he was hit by a bullet while riding with a policeman on a motorcycle.

The three-member crew from New Delhi was in the state for the coverage of the upcoming Assembly polls and had joined the police party travelling on eight motorcycles through a desolate and forested area on their way to Nilawaya village, about 450 kilometres from state capital Raipur.