Merkel is in Delhi and heading the German delegation for the fifth India-Germany IGC. 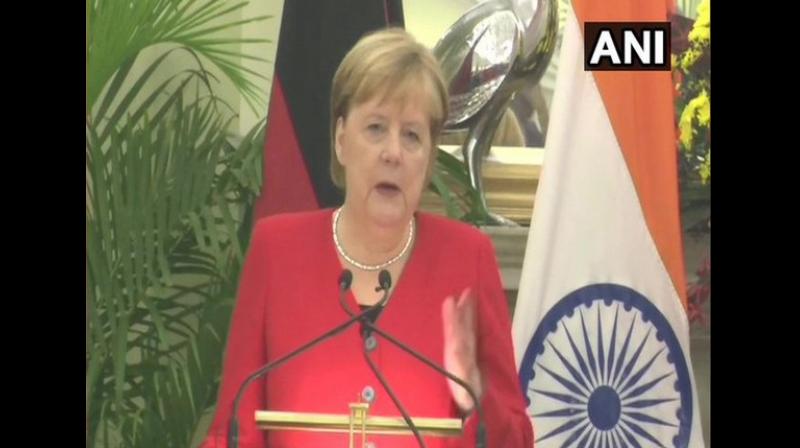 Merkel is in Delhi and heading the German delegation for the fifth India-Germany Inter-Governmental Consultations (IGC).

Both leaders--Merkel and Prime Minister Narendra Modi-- witnessed the ceremony of exchange of documents.

Speaking after the ceremony, Merkel said, "Our two countries are linked by a strategic relationship but also for friendly relations. During my visit. I have learnt a lot about India. Though you cannot learn a lot as India is like a continent that is so diverse in term of culture and tradition."

"We intend to work very closely on sustainable development and climate protection," she said while sharing the stage with Indian Prime Minister Narendra Modi.

"20,000 Indian nationals are studying in Germany. We would like to see even more. When it comes to vocational training, we want to have the exchange of teachers too," she added.

Prime Minister Modi in his address called Merkel a good friend and of both him and India.

"I am happy and proud that she is a good friend of India as well as mine. As Chancellor for nearly a decade and a half, she has made a significant contribution to deepening India-Germany relations. I thank her for that," he said.

"Our relations are based on democracy and rule of law, that is why we share some views on major issues of the world. We will strengthen bilateral & multilateral cooperation to fight terrorism," he added.