The active cases have dropped substantially and are only 6.97 per cent of the total positive cases: Centre 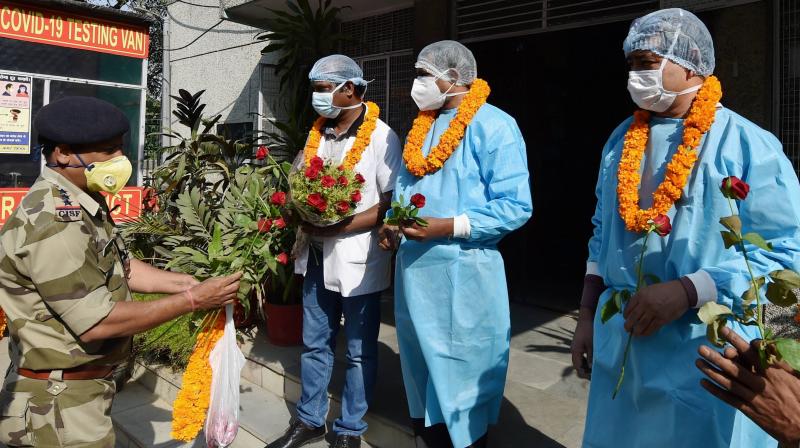 CISF officers and jawans shower flower petals on doctor and health workers during felicitation program to express gratitude towards their contribution in the fight against the coronavirus, at SDMC Urban Public Health Centre, Daryaganj in New Delhi, Saturday, Oct. 31, 2020. (PTI Photo)

New Delhi: With 46, 963 fresh cases, India till Sunday logged in a total of 81.86 lakh COVID-19 cases while the overall fatalities crossed 1.22 lakh with 470 fresh deaths in the last 24 hours. Among those who died was Tamil Nadu’s agriculture minister R. Doraikkannu, who had tested positive for COVID-19 on October 13.

However, a steady decline in active cases continued for the third consecutive day as active cases fell below the 6 lakh mark after nearly three months. Presently India’s total active cases are 5.70 lakh and the number of recovered patients are 74.92 lakh. In the last 24 hours, 58, 684 people were discharged from medical supervision. Higher number of recoveries has aided the national Recovery Rate to further improve to 91.54 per cent.