According to the deal, the first two howitzers will come within six months. 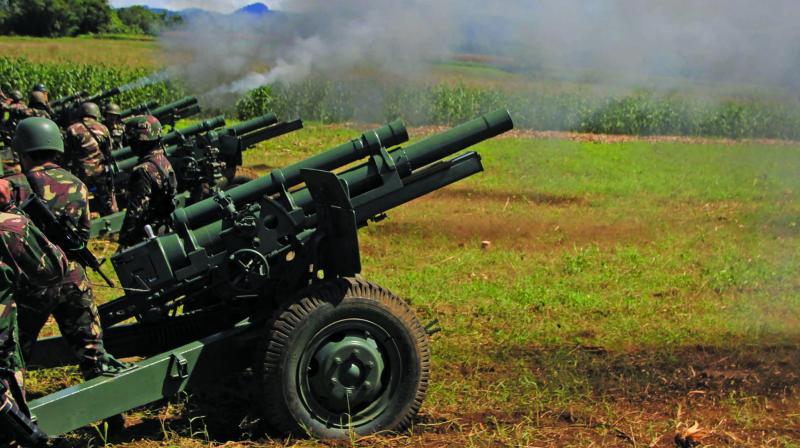 The LOA document was signed during the two-day 15th edition of the India-US Military Cooperation Group (MCG) meet that began here began here on Wednesday.

New Delhi: Six months from now India will get its first howitzer — the first such artillery guns in more than 30 years fulfilling a critical and longstanding gap in India’s arsenal.

On Wednesday, a team of top Indian defence ministry officials and a high-level delegation of US defence officials team met at South Block here to formally ink the about Rs 5,100 crore government-to-government deal to buy 145 ultra-light howitzers.

A defence ministry source told this newspaper: “The Indian and the US teams have now formally signed the contract by signing the Letter of Acceptance (LOA) which is the first concrete step towards getting the acquisition of the guns”.

The LOA document was signed during the two-day 15th edition of the India-US Military Cooperation Group (MCG) meet that began here began here on Wednesday. The forum itself is a platform for “strategic and operational” cooperation between India’s the Headquarters Integrated Defence Staff and US’ Pacific Command.

The Union Cabinet and the Defence Acquisition Council (DAC), the defence ministry’s apex procurement body, have already given the green signal to the deal.

With a strike range of 27 km, the M-777 gun — considered very suitable for high-altitude mountainous and rugged terrain — is expected to be deployed along the Himalayan border with China and the higher reaches of the border with Pakistan. Made of titanium, the ultra-light howitzer can be airlifted and hence easily deployable.

According to the deal, the first two howitzers will come within six months and 23 will arrive in a fly-away condition at the rate of two a month. The rest 120 will be assembled in the country.

The offsets, under which BAE Systems, manufacturer of the gun, will invest about Rs 1,400 crore, will be pursued independently.