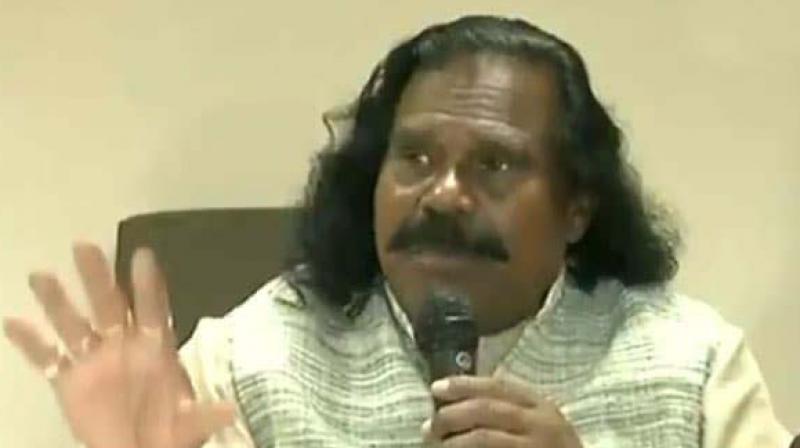 Lucknow: After Uttar Pradesh chief minister Yogi Adityanath stirred a controversy by claiming that Lord Hanuman was a Dalit, Nand Kumar Sai, the chairman of the National Commission for Scheduled Tribes added fuel to the fire by claiming that Hanuman was a ‘gotra’ among tribals and Hanuman, therefore, was not a Dalit but a tribal.

Mr Sai said, “There is a Hanuman gotra among tribals, like there is ‘Giddha’ gotra or ‘Reechh’ gotra. There is a ‘Tigga’ gotra as well in which ‘Tigga’ means ‘vanar’ or monkey. There are various tribal communities and separate gotras. These, like the ‘Garud’ and ‘Reechh’ were part of Lord Ram’s army when he went to war. Hanuman was definitely not a Dalit.”

Mr Sai further said that politicians were given to making statements at political rallies and the Uttar Pradesh chief minister  would have to specify the context in which he called Hanuman a Dalit.

It may be recalled that while addressing an election rally in Rajasthan, Yogi Adityanath had reportedly called Hanuman a Dalit.

The legislator told reporters that “It is ‘inappropriate’ to relate God with a caste.

“God is above caste. There are Gods of all castes... relating them with a particular caste in not appropriate,” he said.

Congress leader Pramod Tiwari has also  condemned Yogi Adityanath’s remarks, and said that “The BJP divides individuals and the society but it is for the first time that it has divided Gods into castes.”