Only 5.50 lakh claims filed for inclusion in NRC 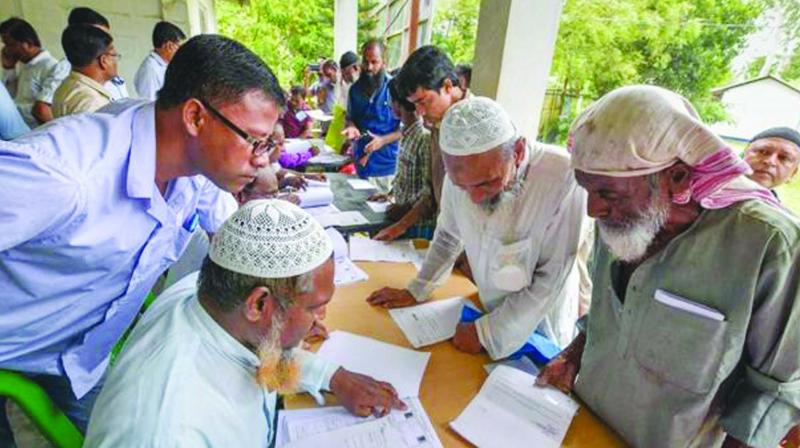 A file photo of people filing documents at an NRC centre in Assam.

Guwahati: If the trend of submission of claims and objections after the publication of the draft of the National Register of Citizens (NRC) is any indicator, it is believed that all the 40 lakh people whose names were dropped would not turn up to file claims for inclusion of their names.

Pointing out that it is now more than two months since the process of claims and objections has started, official sources said that only around 5.50 lakh people have submitted claims so far.

Most of the claims have been received in the districts of Kamrup (Metro), Cachar and Dhubri. Sources pointed out that the number of claims in Kamrup (Metro) is high because of the presence of a large number of floating population, while a substantial number of people from outside the state are also living here and some of them could not submit their documents during the submission of applications.

In a significant move, the NRC authorities have also decided to engage at least 1,500 to 2,500 Class I officers of the state government in the process of verification of claims and objections filed on the draft National Register of Citizens (NRC), while the district magistrates will supervise the entire process. Senior officers will also be appointed as observers to monitor the process of verification of the claims and objections.

Sources admitted that the process of submission of claims remains slow and it is evident that all those whose applications were rejected would not file claims. “The persons who tried to get their names included in the NRC with forged documents, which were detected during the process of verification will definitely not file claims. Moreover, a large number of forgeries were caught during the hearings on the family tree verification and they will definitely not file claims. Those who file claims will have to appear in hearings and the persons who are aware that they are not bona fide Indian citizens will not like to appear in hearings to get caught again,” sources pointed out. The process of receiving claims and objections will come to an end on December 15.

For the claims and objections process, forms are available in 2,500 “Seva Kendras” in Assam, where people can file their appeal in their areas, sources said. People can file corrections to their names that are in the draft and also raise objections against suspected foreigners.

However, fewer than 100 applications have been received by the authorities challenging the inclusion of the names of suspected illegal immigrants in the draft NRC.

The NRC coordinator’s office has also issued advertisements through the media about the process of filing of claims and objections and a fresh campaign will be launched again within the next couple of days, while, the process of correction of names will also start next week.

The update of the NRC, the massive exercise to identify genuine Indian nationals living in Assam, had excluded over 40 lakh people from the draft list published on July 30, creating a political controversy. The exercise aimed at identifying illegal immigrants in the state that borders Bangladesh was carried out only in Assam, which faced influx of people from Bangladesh since the early 20th century.

When the NRC was first prepared in Assam way back in 1951, the state had 80 lakh citizens. As per the 2011 census, Assam’s total population is over 3.11 crore.The process of identification of illegal immigrants in Assam has been widely debated and become a contentious issue in the state’s politics.

A six-year agitation demanding identification and deportation of illegal immigrants was launched by the All Assam Students Union (AASU) in 1979. It hadculminated in the signing of the Assam Accord on August 15, 1985, in the presence of then Prime Minister Rajiv Gandhi.