The Congress president alleged that the surgical strike was made public as the BJP was fighting elections in Uttar Pradesh. 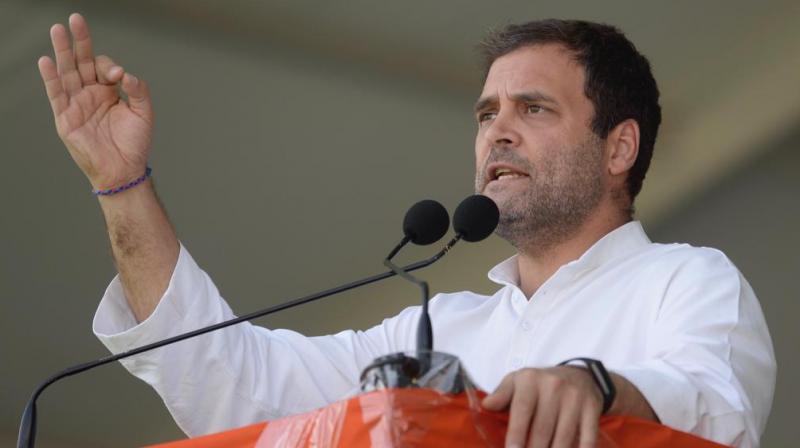 On demonetisation and GST implementations, Gandhi claimed that people have confusion about these. (Photo: File)

Jaipur: Congress president Rahul Gandhi today accused Prime Minister Narendra Modi of shaping the army's 2016 surgical strike across the Line of Control (LoC) into a "political asset" and being "unsuccessful" in creating job opportunities for the youth.

"The government waived loans of 15 to 20 industrialists. Banking system is concentrated only for them. NPA is not of Micro, Small & Medium Enterprises, traders, doctors or lawyers," Gandhi alleged.

Referring to the surgical strikes on terror launch pads across the LoC on September 29, 2016, Gandhi told the gathering, "Like during the Narendra Modi government, surgical strike was conducted thrice during Manmohan Singh government. Are you aware of it? (Narendra) Modi actually reached into the Army's domain and shaped surgical strike into a political asset."

The Congress president alleged that the surgical strike was made public as the BJP was fighting elections in Uttar Pradesh.

On demonetisation and GST implementations, Gandhi claimed that people have confusion about these.

When asked about data privacy, Gandhi said IT companies have understood that India and China has large data.

"Data should remain with people and not crony capitalists. That is our belief," he said.

Claiming that even though India has medical insurance schemes like Ayushman Bharat, it does not have good hospitals, the Congress chief said, "We cannot run the country without pumping money into public health and education sectors."

“China has a lead but we have not lost the competition,” he said.