The naming of Pakistan in the Indo-Japan Joint Statement on the terrorism issue is being seen as a major victory for India. 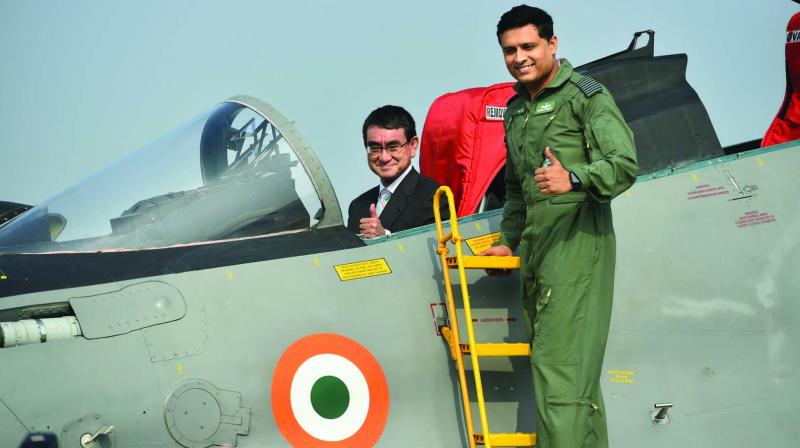 Japan’s defence minister Taro Kono sits in the cockpit of a fighter plane at the Air Force Station Hindon in Ghaziabad on Saturday. (Photo: PTI)

New Delhi: India and Japan on Saturday evening held their first-ever 2+2 dialogue at the foreign and defence ministerial level in New Delhi, after which the two countries asked Pakistan to act firmly against terrorism.

In a joint statement, the two countries noted "the threat posed to regional security by terrorist networks operating out of Pakistan and called upon it (Pakistan) to take resolute and irreversible action against them and fully comply with international commitments including to the (global anti-terror watchdog) Financial Action Task Force (FATF)". Obviously with an eye on China, both India and Japan also "reaffirmed the importance of freedom of navigation and overflight, unimpeded lawful commerce and peaceful resolution of disputes" in the South China Sea.

The naming of Pakistan in the Indo-Japan Joint Statement on the terrorism issue is being seen as a major victory for India. Also, the reference to the South China Sea in the Indo-Japan Joint Statement is being seen in the context of China’s military assertiveness in the region and is being viewed as extremely significant. In what is being seen as a reciprocal acknowledgement of Japanese security concerns, both countries also "condemned North Korea’s recent launches of ballistic missiles".

India and Japan also announced that there had been "significant progress made in the negotiations of Acquisition and Cross-Servicing Agreement (ACSA)" — a proposed logistics support agreement that will reportedly enable the armed forces of both countries to use facilities at each other’s military bases.

The two countries expressed "desire for early conclusion of the negotiations and were of the view that the agreement will further contribute to enhancing defence cooperation between the two sides". It had earlier been decided to commence the negotiations for ACSA in October 2018. India currently has such a pact only with the United States and is also planning one with Russia. In another major development, it was announced that "the ministers also concurred to proceed with coordination for the first India-Japan joint fighter aircraft exercise in Japan".

The 2+2 Dialogue was conducted from the Japanese side by Japan’s foreign minister Toshimitsu Motegi and defence minister Taro Kono while external affairs minister S. Jaishankar and defence minister Rajnath Singh and it was affirmed that it would "enhance the strategic depth of bilateral security and defence cooperation". It was also decided to hold the next 2+2 ministerial meeting in Tokyo.

Saturday’s Dialogue comes a couple of weeks ahead of the crucial Annual Summit to be held in India between Japanese PM Shinzo Abe and Prime Minister Narendra Modi. On the issue of terrorism including that emanating from Pakistan, the Joint Statement said, "The ministers condemned in the strongest terms the growing threat of terrorism and acknowledged that it constituted a major threat to peace and security in the region. The Ministers called upon all countries take resolute action in rooting out terrorist safe havens and infrastructure, disrupting terrorist networks and eliminating financing channels and halting cross-border movement of terrorists.”

The Ministers underlined the need for all countries to ensure that all territory under their control is not used to launch terrorist attacks on other countries.

On the South China Sea, the Joint Statement said, "The Ministers exchanged views on the recent developments in the South China Sea ... In this context, the Ministers reaffirmed the importance of freedom of navigation and overflight, unimpeded lawful commerce and peaceful resolution of disputes with full respect for legal and diplomatic processes in accordance with the universally recognised principles of international law, including those reflected in the United Nations Convention on the Law of the Sea (UNCLOS). The Ministers also took note of the negotiations of a Code of Conduct (COC) and urged that it should be effective, substantive, and consistent with international law, including the UNCLOS, ensure freedom of navigation and must not prejudice the rights and interests of the stakeholders using the South China Sea and freedoms of all states under international law."

The Joint Statement further said, "The Ministers had a frank and fruitful exchange of views on the regional issues of mutual interests particularly on the security situation in the Indo-Pacific. ... Recalling that the two sides had a shared vision of a free, open, inclusive and rules-based Indo-Pacific region in which the principles of sovereignty and territorial integrity are ensured, and all countries enjoy freedom of navigation and overflight, the Ministers emphasised that further strengthening of bilateral cooperation was in mutual interest of both countries and would also help in furthering the cause of the peace, security and prosperity in the Indo-Pacific region. ... The Ministers reaffirmed the importance of supporting ASEAN centrality and unity for promoting peace and prosperity of the Indo-Pacific."