Sources said that the duo discussed a wide range of issues on the flight to and from Morena. 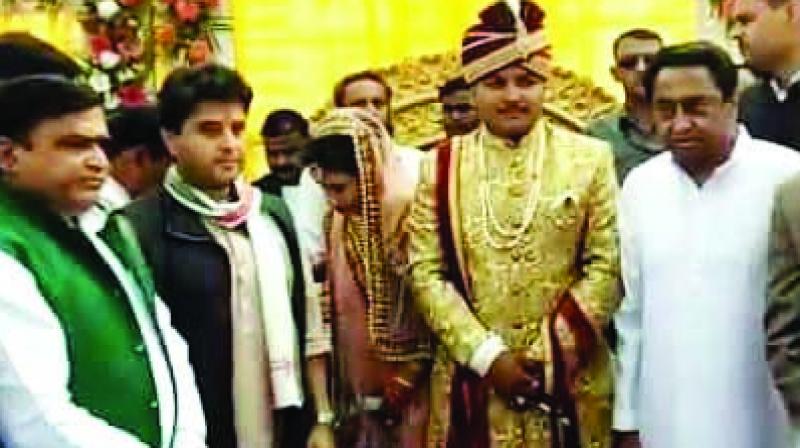 Bhopal: AICC general secretary Jyotiraditya Scindia — who recently kicked up a political storm by omitting Congress from his revised Twitter profile — Saturday put to rest speculations of snapping ties with his party saying, “I am a soldier of the Congress and will remain so”.

Mr Scindia told reporters in Gwalior that unnecessary confusion had been created over his revised Twitter profile in which he had “rightfully” described himself as a “Jan Sevak” or public servant.

“I am not quitting the Congress. I am a solider of Congress and will remain so,” he said. Mr Scindia also hailed the Uddhav Thackeray-led coalition government in Maharashtra saying, “The new government will speed up development in the state”.

In another development, the scion of the former royal family of Gwalior Saturday accompanied chief minister Kamal Nath in his copter, to and from the marriage ceremony of the son of local Congress MLA, Banbari Lal Sharma, in Morena, Madhya Pradesh.

Mr Scindia — who in recent times had written a series of letters to Kamal Nath, pulling him up for his failure on several fronts – thus quashed rumours of a growing rift between the two leaders. Sources said that the duo discussed a wide range of issues on the flight to and from Morena.

This assumes significance, particularly in the wake of talks of the appointment of a new Pradesh Congress Committee (PCC) chief in MP in the near future. Mr Nath had held the twin posts of chief minister and PCC president and recently announced quitting the party post to focus on governance. Mr Scindia, who lost the last Lok Sabha elections from Guna in MP, had been gunning for the party post.