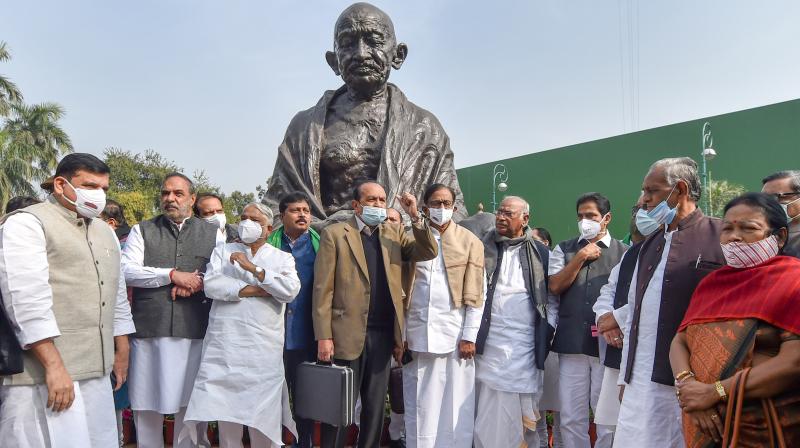 New Delhi: Refusing to revoke the suspension of 12 Opposition MPs as urged by the Leader of the Opposition in the Rajya Sabha, Mr Mallikarjun Kharge, Chairman M. Venkaiah Naidu on Tuesday said the members who had committed the “sacrilege (during the Monsoon Session) against the House” did not express any remorse (over their conduct) but actually justified it (on television news channels). The Opposition members later staged a walkout after the Chair turned down the appeal. However, MPs of the Mamata Banerjee-led Trinamul Congress, that is trying to project itself as a more credible opposition to the ruling BJP than the Congress at the national level, did not join the Congress-led Opposition MPs’ walkout, but then staged a walkout a few minutes later during the Zero Hour over the same issue. Mr Naidu also gave a point-by-point rebuttal of the issues raised by Mr Kharge to assert that the suspension was over the “gross violation of the Rules of Procedure” and that the procedure can be relevant only on the date of occurrence.

Ruling out any apology by the 12 Opposition MPs, Congress leader Rahul Gandhi tweeted: “Why apologise? To raise people’s issues in Parliament? No, not at all!” After staging the walkout, the Opposition MPs, including some from the Lok Sabha, protested in front of Mahatma Gandhi’s statue in the Parliament House complex. The 12 suspended MPs will be sitting in protest from Wednesday onwards in the Parliament premises.

Stating that 93 per cent of MPs want smooth functioning of the House, Mr Naidu said that “violent acts of a minority in the House are denying the majority of their right of participation in the proceedings of the House”. Asserting he was not happy over the suspension of any member at any time, the Chairman said it was wrong to say that the suspension was anti-democratic as the action was taken to “protect democracy”.

“The motion (for suspension of the 12 Opposition MPs) was moved, it was approved, action is taken, it is final… You try to mislead the House, you disturb the House, you ransacked the table, you also threw papers on the Chair and also some of them have got on to the table and then you are giving me lessons. This is not the way,” said Mr Naidu, adding that “I do not think the appeal of the Leader of the Opposition is worth considering”.

Earlier, Mr Kharge had said that the motion for suspension moved by parliamentary affairs minister Pralhad Joshi was in gross violation of the rules and action was taken in the current Winter Session of Parliament for alleged “unruly” conduct in the last session. Also, the rules require the Chair to name the members before a motion of suspension is moved, which did not happen when the 12 MPs were suspended on a government motion on November 29, he said, adding that the Chair had on Monday not even allowed him to raise a point of order, that according to the well-settled conventions of the Rajya Sabha is always permitted. A member named by the Chair has to withdraw from the proceedings of the House. Six of the suspended MPs are from the Congress, two each from the TMC and the Shiv Sena, and one each from the CPI(M) and the CPI.

Rejecting Mr Kharge’s contention about action being taken over deeds in the last session, Mr Naidu said the Rajya Sabha was a “continuing institution” and the Chairman of the House was empowered to suspend members for unruly conduct under Rules 256, 259, 266 and other residuary powers.

“The Chairman can take action and also the House can take action. What happened yesterday (November 29) was not the Chairman taking action, it was the House, after a resolution moved, that has taken action,” he said. Mr Naidu also read out the minutes from the House proceedings on August 10, 2021, when deputy chairman Harivansh was presiding over the House and the House witnessed unruly scenes.

Mr Naidu also read from the bulletin of that day to state that the names of the 12 suspended MPs were part of the 33 names that had been mentioned in it.