Shale Mohammad is the lone Muslim MLA in Rajasthan cabinet, hailing from the district of Jaisalmer. 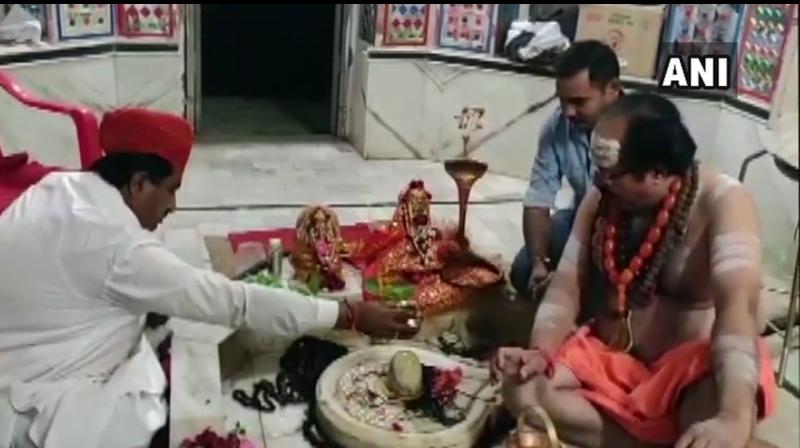 Shale Mohammad is the son of a famous Muslim religious leader Gazi Fakhir, who is known to visit Hindu temples regularly to worship and seek blessings. (Photo: ANI)

Jaipur: Rajasthan Minority Affairs minister Shale Mohammad performed a ‘Rudrabhishek’ puja at the Shiva temple in Sadolai in Pokhran on Monday. The lone Muslim MLA in the cabinet also worshipped at the famous Ramdevra temple in the district.

Shale Mohammad is the son of a famous Muslim religious leader Gazi Fakhir, who is quite popular in western Rajasthan and is the religious guru of Sindhi-Muslim community residing on both sides of the Indo-Pak border in Jaisalmer-Barmer.

Speaking to a reporter of The Times of India, Mohammad said that he prayed for peace, happiness, prosperity of the state at both temples. “My family and I have always had a deep faith in Hindu temples. Whenever I get a chance I visit a Hindu temple,” the minister said.

The minister also said that western Rajasthan is best example of communal harmony. “Hindus and Muslims both have strong faith in Baba Ramdevji (a temple in Ramdevra of local deity Baba Ramdev),” Shale was quoted by Hindustan Times as saying.

It is the first time an MLA from the Jaisalmer district has received a ministerial berth in the state cabinet, and it is surprising because the district has only 2 assembly seats in the 200 member house of Rajasthan.

Shale was pitted against a Hindu priest, Maharaj Pratap Puri of Taratara Math in Barmer district, representing the BJP.

In a very tight competition, both the candidates secured over 82,000 each but Mohammad managed to win with a margin of 872 votes.