India   All India  02 Jan 2020  Military stays away from politics: CDS
India, All India

Military stays away from politics: CDS

He assumed charge as the nation’s first Chief of Defence Staff on Wednesday. 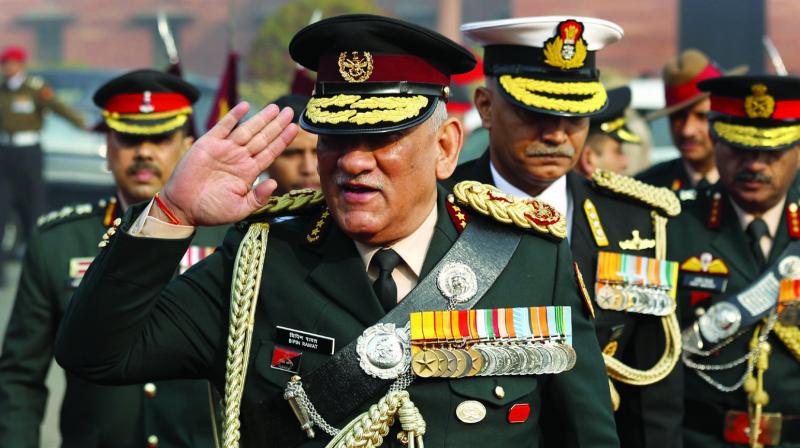 New Delhi: The new Chief of Defence Staff, Gen. Bipin Rawat, on Wednesday said the country’s armed forces stayed away from politics and worked as per the directives of the government. His statement comes amid allegations by the Opposition parties that the armed forces were being politicised.

“We stay away, we stay far away from politics. We work on the directives of the government in power,” said Gen. Rawat. He assumed charge as the nation’s first Chief of Defence Staff on Wednesday.

Prime Minister Narendra Modi said the creation of the department of military affairs and institutionalisation of the post of Chief of Defence Staff are momentous reforms that will help the country face the ever-changing challenges of modern warfare.

“I am delighted that as we begin the new year and new decade, India gets its first Chief of Defence Staff in Gen. Bipin Rawat. I congratulate him and wish him the very best for this responsibility. He is an outstanding officer who has served India with great zeal,” the Prime Minister tweeted.

Gen. Rawat said the CDS’ mandate was to integrate the efforts of the three services and to work as a team. “I want to assure you the Army, Navy and Air Force will work as a team. The CDS will keep control over them, but action will be taken through teamwork,” he said. He said the CDS will not try to run a force by his directions, and will remain neutral towards all the three services.

Gen. Rawat said that India doesn’t need to follow the Western model on joint theatre commands and can have its own me-chanism for a tri-service
command system. “There are methods of doing theaterisation, I think we all are copying Western methods and what others have done. We can have our own systems. We will work out mechanisms through understanding with each other and I think it will work,” he said. Gen. Rawat said: “We will work with all the three services. We will come out with a mechanism that suits the Indian system.”

Gen Rawat said his focus will be to ensure the best and optimal use of resources allocated to the three services. “The task cut out for the Chief of Defence Staff is to integrate the three services and enhance their capability. We will continue working towards that,” he said. Gen Rawat said that apart from giving attention to integration and joint training, efforts will be made to ensure uniformity and integrating of systems for procurement.

On the government’s three-year timeline to achieve integration between the forces, the CDS said it was possible and he will strive to achieve it. “Integration is needed. We have to ensure that 1+1+1 combine of the three services adds up to 5 or 7, and not 3. You have to achieve more through synergy and integration, that is the aim of the CDS,” Gen. Rawat said.