In September a ban was imposed on plastic PET water bottles paving way for cleaner environs in Nilgiris. 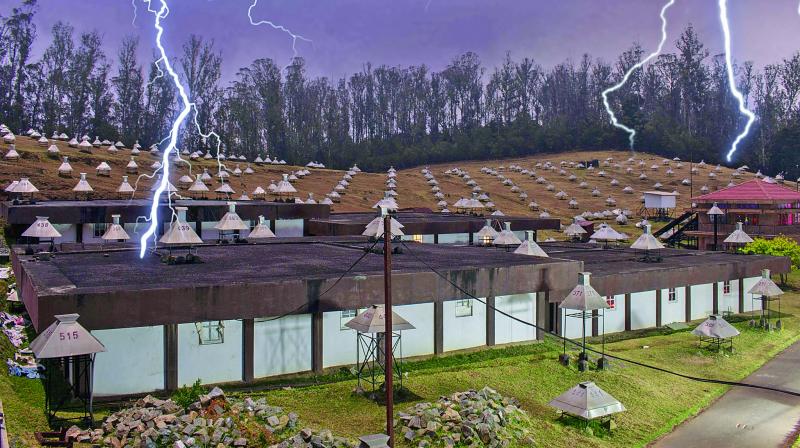 OOTY: A revisit to 2019 in Nilgiris showed that the hills made some phenomenal impact in science, arts, education and environment.

The early part of 2019 saw that the Cosmic Ray Laboratory here came out with its phenomenal discovery on measuring the thunderstorm voltage using its GRAPES-3 telescope (Gamma Ray Astronomy at  PeV Energies Phase-3).

Though it took nearly four years for CRL to verify its findings, it finally released its discovery this year and through this startling discovery it helped solve the questions about how to fashion a tool or devise to measure the high voltage electricity in the thunderclouds.

In September, Dijo Thomas, a Kerala-based conservation biologist andresearcher, claimed to have discovered a new sub-species in “Neelagiri Kaduva” family which is named as “Neelagiri Cheruvan”, which still needs more verification. "Neelagiri Kaduva" a new species with features of both ‘Feline and Canine families’ with its face like a dog and body like stripes in tigers.

In November, R. Kannan, an engineer in Kotagiri, who is also a documentary maker on rock arts, discovered  Petroglyph (rock carvings) at  Keezhkondi deep insides the  jungles in Kotagiri slopes, which revealed the presence of ancient human culture in Kotagiri limits in pre-historic period that was about 4,500 years ago.

In October, R. Bhuvan, and  S. Sheik Mohamed Ur Rehman , both studying at Crescent Castle Public School(CCPS) here made their way to NASA for an international space conference after excelling in an essay competition held earlier on space research.

In the same month, V. Alan Yohan, from the same school bagged the top honours in the National art competition organized by the council of Association of Schools for the Indian School Certificate(ASISC) at Hyderabad.

In the environment sector, while the Nilgiris district administration banned 23 types of plastics from the beginning to 2019, in September a ban was imposed on plastic PET water bottles paving way for cleaner environs in Nilgiris.